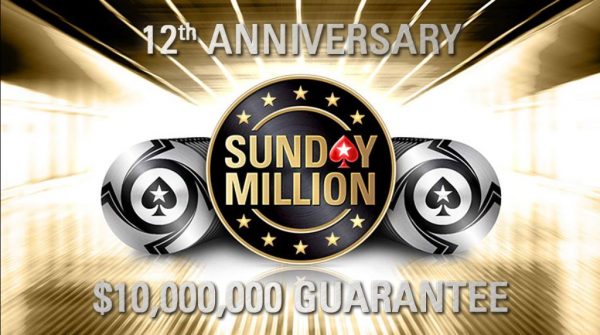 After having run the same event for two successful years, PokerStars fell heavily short of the guaranteed prize-pool for their Sunday Million tournament which began a couple of days back. To commemorate the anniversary of the Sunday Million, they boosted the prizepool 10x, to have a $10 million GTD Sunday Million, as compared to the usual $1 million GTD.

Even if the operator fees ($15) were added to this prizepool, there would still be a total overlay of $545,000 for PokerStars. They ran this 10x GTD Sunday Million for the first time in 2016, to celebrate their 10th anniversary and that tournament saw over 55,000 entries, taking the prizepool to $11 million but this wasn’t the case in 2018.

This huge overlay created on the company’s 12th anniversary would’ve been a huge disappointment, both for players as well as for PokerStars. Sunday Million has always been one of their most popular tournaments but this time, the $1 million guarantee for the first prize was not enough to lure in the number of entries that were required.

Quite a few Indians participated in this huge event out of which The Spartan Poker Ace Amrita Sethi ended yesterday’s play at #63 with a good chance of finishing in the top. However, the next day may have not gone as she planned, getting eliminated at #302 and finishing with a prize of $3,192 (~INR 2.1 lakh). The top ranked among the Indians playing in the tournament was Siddharth Mundada who was busted at #102, bagging a prize of over $11,000.

PokerStars will have some serious thinking to do after conceding this big overlay. Will the 10x Sunday Million continue from next year? Will the buy-in decrease next time, given that $215 may be slightly higher than most players are willing to spend to enter a tournament.

For similar news articles from the world of poker, keep following GutshotMagazine.com!