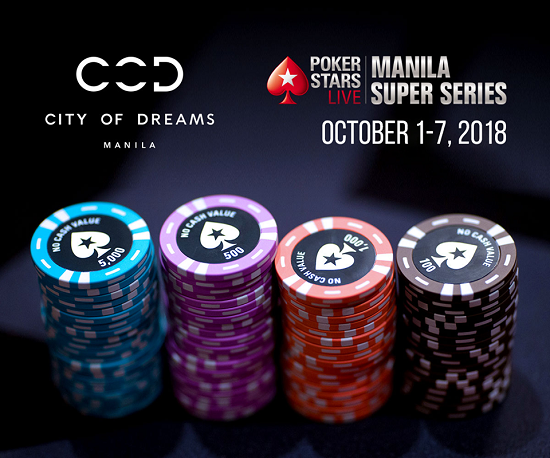 In recent years, the number of poker tournaments and series in Asia have been rapidly increasing, especially in the preferred locations of Macau and Manila. A number of events are constantly being added to the Asian poker calendar, with PokerStars Live being one of the biggest players in the region.

Now, PokerStars Live took to their Facebook page to announce the Manila Super Series 9, scheduled between 1-7 October 2018 at the City of Dreams Manila. Yes, if you were wondering, PokerStars will also be awarding one PSPC (PokerStars Players Championship) Platinum Pass at the series, worth $30,000.

There are a few highlight tournaments in this series, but only the winner of the PHP 3 million GTD Main Event will be awarded with the Platinum Pass, for a chance to play in The Bahamas early next year. The Main Event will have the same guaranteed prize pool as in the previous two editions of the Super Series.

Just recently, APT also announced that they will be shifting their season-ending APT Finale series from Macau to Manila, so there’s going to be a lot of poker action in Manila during this latter part of the year. The full schedule of the Manila Super Series 9 isn’t out yet, but you can keep reading GutshotMagazine.com for an update when it is announced.