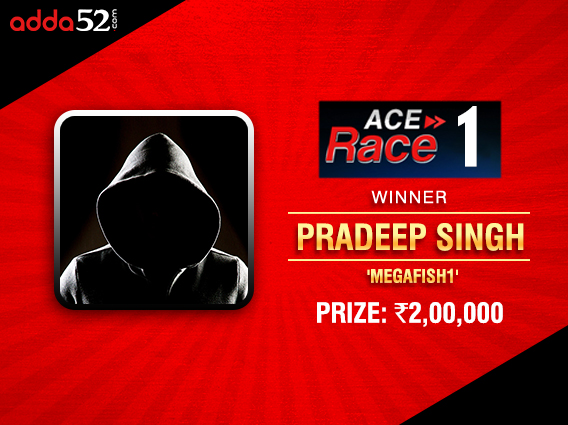 Adda52 is one of India’s most respected poker websites and they have unique ways of rewarding their most loyal users. They have a promotion known as Ace Race Leaderboards, where a total of INR 15 lakh is given away to the top performers in Adda52’s featured tournaments during the month. These featured tournaments include The Roar, Judwaa, Godfather, Whale, Hitman, Adda52 Millions, Sunday Suits, Sunday AF tournaments and Beast.

INR 5 lakh is given away each time to the top 9 most consistent performers of that period. The month of September began just a while back and the most consistent player on Adda52 until now has been Pradeep Singh aka ‘MegaFish1’, who topped Ace Race I for September and bagged the top prize of INR 2,00,000! The rest of the prizes were spread out among the top nine.

For those who have been following the top tournaments on Adda52, you would know that Singh won a majority of his leaderboard points for this period when he shipped the Whale tournament a few days back. He has finished in the money on several occasions in the past few weeks and is now a serious contender in top tournaments.

The Ace Race Leaderboard is becoming a very popular promotion on Adda52, where players don’t really need to wait an entire month to win the top prizes. Just ten days of good poker and you can be a winner too. Last month, Goonjan Mall topped Ace Race 2 and Naren Purohit topped Ace Race 3. Keep reading GutshotMagazine.com for more updates on the top poker promotions in India.