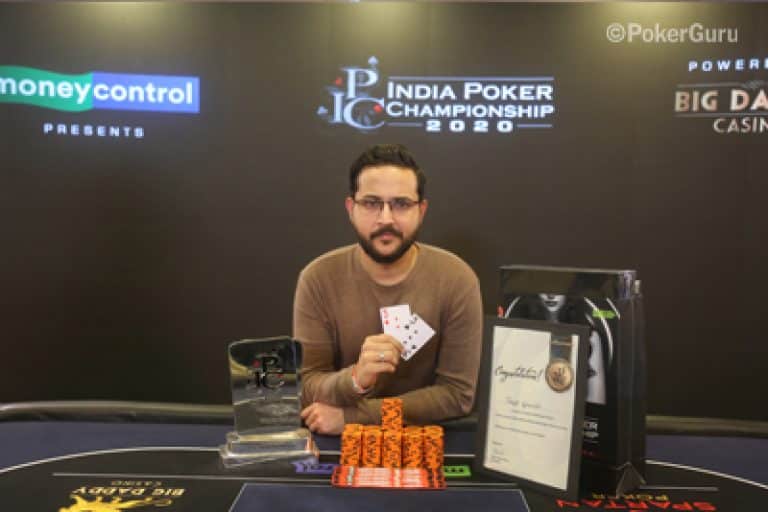 When the India Poker Championship returned in September 2019, records were broken across all four tournaments in terms of attendance and this included the 15k Head-Hunter tournament which attracted 348 entries. However, records are meant to be broken and that’s exactly what happened yesterday too, as the same tournament attracted 364 entries today!

It was the fourth and final tournament of the series and it ran alongside the 50k Main Event which also saw a record prize pool being generated. Those running deep in the Main Event couldn’t participate in the 15k bounty tournament but there were still a few known names in the running. Eventually, the prize pool was calculated and the top 41 places finished in the money with a min-cash of INR 18,100.

However, there were ways of making a profit without having to finish ITM, as bounty bands were given away for every elimination. From the INR 34,76,200 prize pool, INR 7,51,000 was reserved for the winner and that winner turned out to be Prajit Ghambir who smashed through the field and emerged victorious, bagging his maiden IPC title in the process after a 3-way deal.

“To be honest, in the early stages of the tournament till Level 8 when the late registrations closed, I saw that there were 364 players, I was running card-dead, I did not pick a lot of hands. The idea was to survive in that first phase. When the late registrations were closed, I knew that people would now start shoving and there’d be a decline in the number of players. I just felt I had to capitalize and figure out the right positions to put my money in and try to win as many spots I could and before I knew it, there were just 55-60 players left. The way I play poker is, I make short-term goals, instead of thinking I want to ship it. So initially I just wanted to be in the money. Then I wanted to make it to the top 20. When I did make it to the final table, I was sixth in chips out of the nine and from there it was just how you manoeuvre, the spots that you choose,” he said after the victory.

For more updates on the India Poker Championship and other events across the world, stay tuned to GutshotMagazine.com.