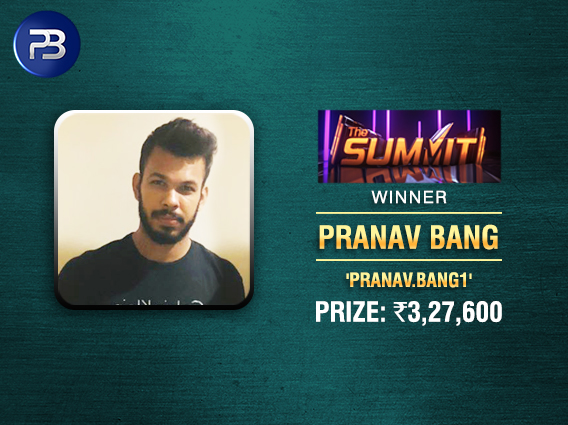 It seems as if the Bang brothers want to take over the online poker circuit in India. In the last couple of months, we’ve been hearing a lot about Srihari Bang, a player who plays under the name ‘bangbang99’ on The Spartan Poker. The player has won a few titles and made plenty of final tables recently, and each time Gutshot caught up with him, we praised his elder brother Pranav for introducing him to poker and teaching him the nuances of the game.

Now all the top poker companies in India have a few of their own signature tournaments and for PokerBaazi, The Summit MonsterStack Turbo INR 10 lakh GTD tournament is one of them, an event hosted every Thursday night at 8pm on PokerBaazi, and many big pros always turning up to play in this one.

7 hours and 1 minute is how long the tournament ran before we had a winner in Pranav Bang aka ‘pranav.bang1’. When you read on to see the names of the players who were part of the Final Table, you will realize how well the elder Bang brother has done to win this popular tournament.

Finishing second was Siddharth Karia aka ‘schemer’, who took away the runners-up prize of INR 2,38,875, after finishing second in The Vegas just a day back. “Back to back 2nd position for me. I came 2nd in Vegas yesterday and now in Summit. Loved switching to the turbo format. Great structure as always. Cheers,” is what he said when we spoke to him earlier today.

Finishing in third was other known player, Abhisek Panda, who took home INR 1,74,037. Busting in 8th place was none other than Sumit Sapra aka ‘boronyx’, and everyone knows how many accomplishments he has in poker, while another top player was Rubin Labroo aka ‘kornkid’, who finished 9th and is on a great run in online poker himself.

The Summit has a buy-in of INR 8,250 and yesterday’s tournament saw a total of 182 entries. This broke the guarantee and created a new prize pool of INR 13.65 lakh, which was eventually shared among the top 15 players (min-cash – INR 30,712). Pranav Bang was brilliant last night, and he deservingly took home the mega top prize of INR 3,27,600.

Gutshot congratulated Pranav on this big win and asked him his views on the tournament. He said, “Thank you so much. Feels good to win after such a tough final table which included the likes of Schemer, CairyHunt, AbhisekPanda, boronyx and such other regs. Although the final table was a sail through with people busting at a quick pace. And the heads up was fun too against schemer. It went on for quite some time but was worth it. The new PokerBaazi UI is just amazing, and the new reward scheme is the best in the market. Great work by the Pokerbaazi team. PB has been like a home ground to me. Navi has been very kind to me from the beginning and its really appreciable for a man of his stature.”

PokerBaazi also currently has The Grinders Series taking place, where INR 40+ lakh is being given away between 3-9th September. Last night, popular player Akshay Nasa aka ‘sherlock52’ shipped Grinders Event #19 Thursday MonsterStack, where he beat 161 entries to take away the top prize of INR 77,280. Keep reading GutshotMagazine.com for more updates on the biggest poker tournaments in India, both online and live.