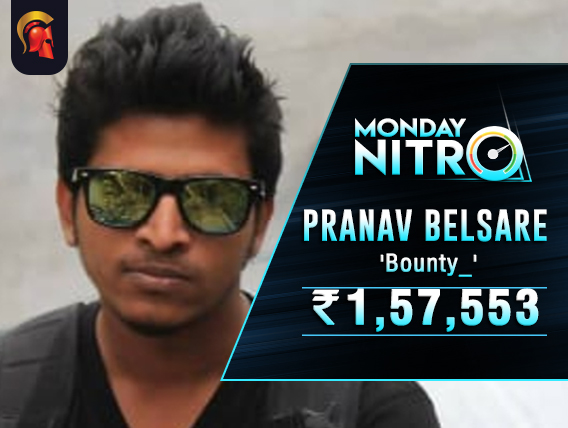 Monday is a cool off day for all the extravagant tournaments that the community plays on Sundays. The players need a breather, and this is exactly what Spartan Poker provided to them yesterday, a relatively low-ranged new feature tournament called Monday Nitro INR 8 Lakhs GTD after the week-long Spartan Super Series (SSS) that ended on Sunday.

The tournament began at 7.30 pm on Spartan, usually the time a feature tournament starts on the platform, saw itself running till 11.55 pm the same night. The buy-in of INR 2,200 was chipped in by the field which consisted of a total 296 entries (including 40 re-entries and 96 re-buys). The top 27 places were paid for a min-cash of INR 8,000.

Pranav Belsare aka ‘Bounty_’ shipped last night’s tournament on Spartan after playing for almost 5 and a half hours non-stop. He pocketed INR 1,57,553 after a heads-up deal with his opponent ‘Barrel_57’. The latter earned INR 1,39,246 as his share of the ICM chop, which is not far from the winning amount.

Belsare, though a relative newcomer to the scene, didn’t fail to run deep in the recent SSS. He finished runner-up in two of the events, the SSS #9 on Day 2 and SSS #14 on Day 3, a good achievement this early in his career. He’ll be looking to continue the winning trend for upcoming tournaments on Spartan and hope to ship them too.

We contacted Belsare after his win and he was excited to speak to us. He said, “Persistence is the key to success. I’ve been into poker since the past couple of years and have been grinding online since then. I follow games of the best players of the community and take inspiration from them. I improvise the situation to make the most of my game. I’d like to say to other players that don’t look at your mistakes as a LOSS but think of them as KNOWLEDGE gained.”

About his background he added, “I’ve always been into games since childhood, be it a field game or board games like chess, etc. It even became my profession as I currently own the Vortex Gaming Lounge, a gaming lounge based in Pune.” Lastly he gave some feedback saying, “I like playing on Spartan becasue of the smoothness of its interface.“

The Monday Nitro is not a huge tournament by any stretch of the imagination but nevertheless, it didn’t fail to attract some winners from the SSS. Finishing 5th for INR 53,520 was SSS #38 winner Manash Nayak. Filling the 10th place was SSS #37 DareDevil winner ‘Psycorp1’ for INR 15,200. Others include SSS #34 winner Kanav Parwal aka ‘Alibaba_kings’ (11th), SSS #11 Mega Stack winner ‘sodosopa’ (14th), regular Rohit Mishra aka ‘ShippingYard (15th), and others.

Keep reading GutshotMagazine.com for more such tournament roundups, updates and for your daily dose of poker news from around the world.