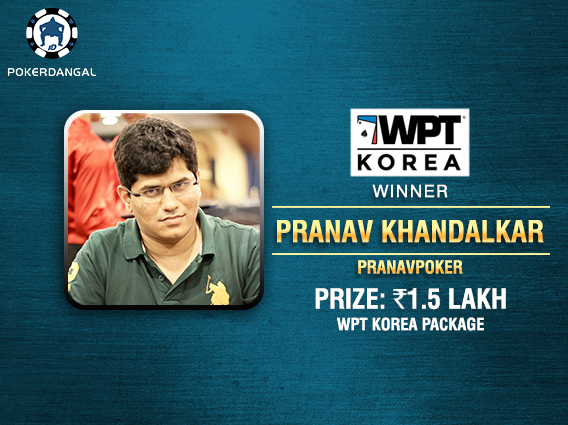 There are so many live poker tournaments and series taking place across the world throughout the year, and PokerDangal is one Indian poker company that has always wanted to reward their players with such international poker packages, be it a trip to the APPT Manila or the WPT Korea or EPT Sochi or any other top poker festivals.

The WPT Korea Main Event Satty kicked off on 18th August and a total of 68 entries registered to the INR 3,300 buy-in tournament. With the top prize being an INR 1.5 lakh package to WPT Korea, this would be quite a huge return on investment for the winner, so everyone had their eyes on that top prize.

Coming out on top of this field that had some of the top players from across the country was Pranav Khandalkar aka ‘pranavpoker’, who will now be packing his bags to fly to South Korea and play in the prestigious World Poker Tour Main Event there. The series will take place between 18-24 September and Khandalkar’s package includes his flight tickets, his stay in Korea and of course, a ticket to the Main Event, which has a buy-in of KRW 1,100,000 (~INR 70,000).

For Khandalkar, this wouldn’t have been too tough, as he has won big in online poker in the past. Just a couple of months back, he created headlines shipping Spartan’s Millionaire tournament for a massive top prize of INR 25 lakh, where he outlasted a field of 1,167 participants, which would’ve included top Indian pros.

Gutshot caught up with Khandalkar after winning this WPT Korea package. He said, “It’s an awesome feeling shipping any tournament and winning a satty to an international trip only adds to the excitement. Really excited about the trip. Looking forward to more such events.”

“PokerDangal tournament structures are really great. Karan Gandhi and the other owners personally look into the details. To add to that, their cashout process is fantastic,” he added about playing on PokerDangal. Keep reading GutshotMagazine.com for similar updates on the biggest poker tournaments in India and around the world.