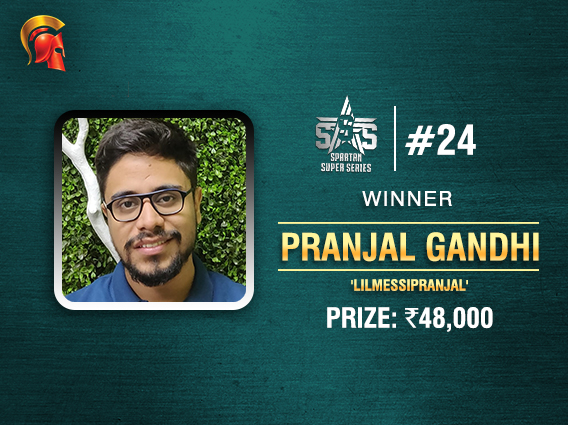 The Spartan Super Series (SSS) is on in full swing, with several tournaments scheduled each day on The Spartan Poker. While there are a few highlight events and a featured tournament daily, there are also a couploe of side events taking place each day, giving everyone the chance to win without worrying about extremely steep buy-ins.

SSS Event #24 INR 200k GTD was one such side event to kick off yesterday – the third SSS tournament of the day. With a buy-in of INR 1,100, a total field of 147 unique players registered in addition to re-entries and the top 21 players shared the INR 2 lakh prize pool with a min-cash of INR 2,500.

Coming out on top of this field and adding another SSS title to his name was Pranjal Gandhi, who plays on Spartan under the name ‘lilmessipranjal’. The player dominated the field and was rewarded with the top prize of INR 48,000, after beating ‘BlueLays’ in heads-up.

BlueLays seems to be a pretty decent player himself, having already won one title in this SSS series, along with a 6th place finish in yesterday’s Elite HighRoller and other cashes too, which led the player to finishing at #3 on the SSS Leaderboard after Day 5. In this tournament, he won INR 32,500 for finishing second.

This wasn’t Gandhi’s first SSS title, having won the SSS Mega Stack for over INR 4 lakh in June this year, and his good run then continued, once winning titles on both Spartan and PokerBaazi on the same night. Clearly, the player wasn’t satisfied and wanted more, wrapping up yesterday’s tournament by Level #39, with the blinds at 5,700/11,400 – 1,140.

Gandhi had a chip lead of over 6:1 before the final hand was played, where he made the all-in call pre-flop with pocket Fours, while BlueLays had 8h Tc. Fast forward to another dry board which ran out 5s Kd Ks Ac 9h, where BlueLays hit a pair of Kings and Gandhi took down the title with Kings and Fours.

Gutshot had a word with Gandhi after he bagged another SSS title. He said, “It was a good tournament. I’m delighted to have won an SSS event amongst a tough field of good regulars.” Keep reading GutshotMagazine.com for more updates on the Spartan Super Series.