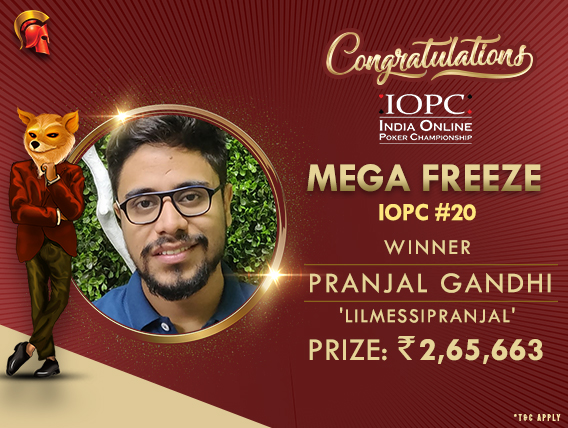 The Spartan Poker is currently hosting the highly anticipated online series of all, the India Poker Championship (IOPC) and Day 4 was in the books yesterday. The day saw a total of 5 events declare its champions and the biggest event of them all was the Monday feature tournament on Spartan, Mega Freeze INR 12 Lakhs GTD.

The winner to emerge as the biggest IOPC winner last night was well-known online grinder Pranjal Gandhi playing under the handle ‘lilmessipranjal’. He took home an awesome 1st place cash prize of INR 2,65,663, beating Abhineet Jain aka ‘pokemon13’ in heads-up. Jain is a well-known player too, recently shipping PokerStars Winter Series ME.

The final hand of yesterday’s tournament was played after a grind of almost 6 hours, at 1.24 am today morning, and Gandhi won with a cool final hand. He made trips on the flop of 5c 5h 2s and shoved his stack post that, holding 5d 4c. Jain called his 472,102 bet but the turn and the river of 6d and Ts proved fruitless for Jain’s 3c Ac. Gandhi shipped the tournament with his Five-trips and Jain had to settle for the runner-up prize of INR 1,76,622.

The champion, Gandhi, is a regular player in the Indian online circuit and has had quite some success previously. He has plenty of online cashes and previous wins to his name. He has won a lot of tournaments especially on Spartan and is a frequent player on the platform. This big win yesterday would surely increase his bankroll by a good margin and enable him to play in more upcoming line-up of tournaments in IOPC. He is an MBA graduate from the coveted NMIMS in Mumbai. We spoke to him after the win and he was “delighted to have won an IOPC event amongst a tough field of good regulars.“

The Final Table saw a couple of regs featuring. Vidwath Shetty aka ‘RoronoA’ rounded up the top 3 and took home INR 1,29,187 for his finish. Best Indian WSOP ME finisher Nishant Sharma aka ‘FunkyouFTW1’ finished 9th for INR 27,692.

The IOPC this time has a staggering 1.5 Crores GTD for the Main Event and is expected to draw a huge crowd comprising of top brass of the circuit. Keep reading GutshotMagazine.com for all timely IOPC results and updates and for your daily dose of poker news from around the world.