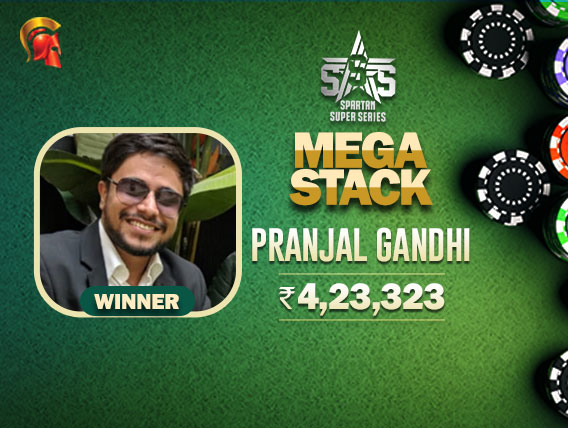 The much-awaited Spartan Super Series kicked off on 11th June and will be played until 17th June on The Spartan Poker. We did a roundup of SSS Day 1 and all events on that first day crushed the promised guarantees, making all participating players extremely happy.

Day 2 of this tournament series that is offering over INR 4 crore in guaranteed prizes was very much the same as Day 1, with all the guarantees being beaten. None of Day 1’s winners were able to recreate their performances yesterday. Pranjal Gandhi won the MegaStack and won vital points towards the leaderboard.

Here’s a summary of all SSS events that were played yesterday:

The second day of this mega tournament series kicked off with this INR 550 buy-in event that saw a total of 520 registered entries and a total of 23 players being paid out a minimum cash prize of INR 3,016. ‘showstopper89’ took down this event, beating ‘Quickgun24’ in heads up and taking home INR 60,450 for his efforts. His 9-K straight in the final hand helped him take this victory, beating his opponent’s pair of kings.

“I am working on changing my game-play since the last month and it has shown results. Last month, I shipped The Elite and FT’d Sunday Super Stack twice on The Spartan Poker. I had a good run in the last SSS and am hopeful of achieving some good results in this SSS as well where I am currently running 11th,” said ‘showstopper89’ after shipping this tournament.

468 entries were recorded in the second SSS event of the day, which had a buy-in of INR 880. Once again, the prize pool was increased to INR 3,74,400, and ’14balwinder14′ took away the biggest share of this prize pool – INR 79,185. He earned vital points to the SSS Leaderboard, having beaten ‘TangoAndCash’ in heads up, thanks to pocket jacks that beat his opponent’s A-10 in the final hand.

This evening event with a buy-in of INR 1,650 saw a handsome participation of 332 entries which took the prize pool up to nearly INR 5 lakh and eventually, 27 places were paid out a minimum of INR 4,980. The final hand was an interesting one as both players went all-in pre-flop. ‘Yopat92’ held Q-A while ‘m275’ had K-J. Both players landed a pair on the flop, but none improvised, with the former winning with ace-pair and taking home a healthy prize of INR 1,10,307 for first place.

This was The Spartan Poker’s featured tournament of the day and all the top pros had their eyes on shipping this one. 543 entries meant the guarantee was crushed and Pranjal Gandhi aka ‘lilmessipranjal’ won the event for a massive payday of INR 4,23,323 while the usual ‘stupefy’ finished as runner up, also winning a handsome amount of INR 2,68,894. In the final hand of this INR 4,400 buy-in event, both had a pair of three with Pranjal winning due to a higher kicker – Ace.

Growing up in the beautiful valley of Dehradun, Pranjal is a 25-year old MBA from NMIMS Mumbai. Like most other poker players, he started with Zynga Poker on Facebook and has been playing real money poker since 2010.

When asked about his win, he said, ”It was a great experience, good deep stacked structure – the kind that suits my playstyle. I won a big flip on the FT. 66 vs A-10 that got me into the chip lead, and there was no looking back from there.” “I hope to crush the online poker scene in India, and hopefully win a WSOP bracelet someday,” he said further about his future poker goals.

It was the last event of the day and no, players weren’t tired of playing poker. With 578 entries, this event saw the largest participation on SSS Day 2 and with a prize pool of INR 11,56,000, a total of 47 players could be paid out a minimum cash prize of INR 6,589. ‘Nascar’ shipped the tournament to end proceedings for the day and he took home INR 2,25,304 for this effort, beating ‘fakenews’ in heads up.

Here’s the SSS Leaderboard after Day 2: 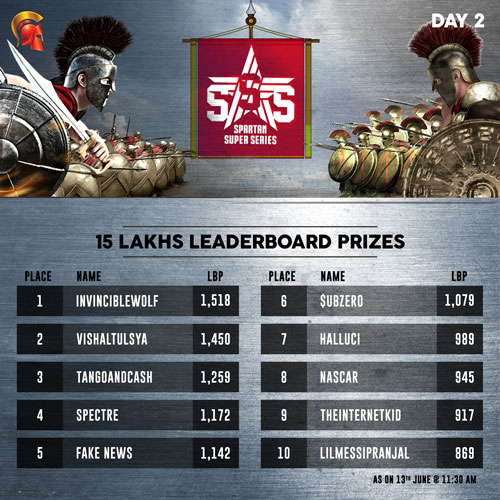 Keep reading GutshotMagazine.com for a daily roundup on the Spartan Super Series as well as updates on other poker tournaments from around the world.