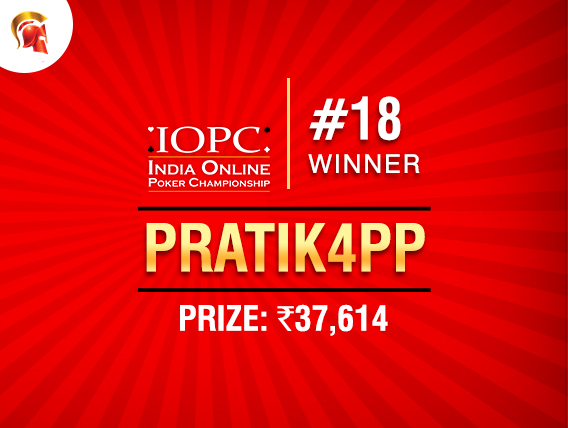 The first tournament of IOPC Day 4 on The Spartan Poker was won by popular poker player Loveleen Singh aka ‘sridevi123’. That tournament was followed by IOPC Event #18 INR 1.75 Lac GTD (770 FO), which was a freezeout tournament that began at 4pm IST yesterday.

268 entries registered to this afternoon tournament and the guarantee was beaten, with a new prize pool of INR 1,87,600 being created and this was the lowest guarantee tournament so far in this cash-rich tournament that has over INR 7 crore in guaranteed prizes. The prize pool allowed the top 39 players to be paid out a minimum cash of INR 1,294.

The freezeout tournament ended with ‘pratik4pp’ outlasting these 268 players and walking away with a pay-check of INR 37,614 for top place. He beat ‘karizmaticka’ in the heads-up battle, who also went home much richer, bagging INR 25,007 for finishing second in this tournament.

pratik4pp held Q-10 and karizmaticka held 6-7 as the flop opened 2-10-6, with the former hitting a pair of tens immediately. The turn then opened 10 and pratik4pp went all-in having completed three of a kind Tens. karizmaticka made a surprising call and as the river card opened 4, the player lost with two pairs – Tens and Sixes.

These two will have their eyes on the rest of the IOPC series as well, as everyone wants to finish on top of the IOPC Leaderboard, where a Jeep Compass, Bajaj Dominar and other exciting prizes can be won. Keep reading GutshotMagazine.com for daily updates on this series.