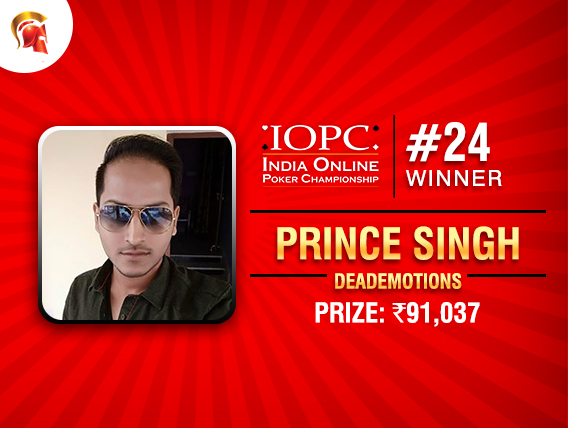 Last weekend, The Spartan Poker launched a record-breaking edition of the India Online Poker Championship (IOPC) with INR 7+ crore in guaranteed prizes being given away between 13-22 July. Yesterday was Day 5 of the IOPC and quite a few tournaments were played during the day.

Gutshot caught up with Prince Singh after his second title. He said, “This was totally different from the earlier win. In the previous one, I had good chips in the later stages (final two tables) but in this one, I was 10/10. I doubled up twice then and was still holding average chips on the final table. The FT was really sick, filled with renowned pros like Vidwath Shetty, Chirag Sodha, Eka Vedantham, Ashish Munot. It was quite challenging with such big names.”

Talking about key hands from the tournament, Singh said, “Pocket Tens from UTG. I opened 2.5x and Shetty re-raised me from MP to 5-6x. I flatted. Flop was AA and some smaller card. I checked he betted. I flatted. Turn was a 10 and I completed my full-house. I checked again as he was aggressive. He bet again. The river was a random card and I checked the river also. As expected, he shoved. I called and got the chip lead. In the final 3, a key hand was pocket sixes from small blind. Button was ‘chilling’. He raised I shoved almost 15-16BBs. We both had almost same chips and he called me from pockets fours and I got a huge chip lead. After that, it was an easy ride for me to ship the tournament. It was really a great experience playing against beasts and moreover beating them all.”