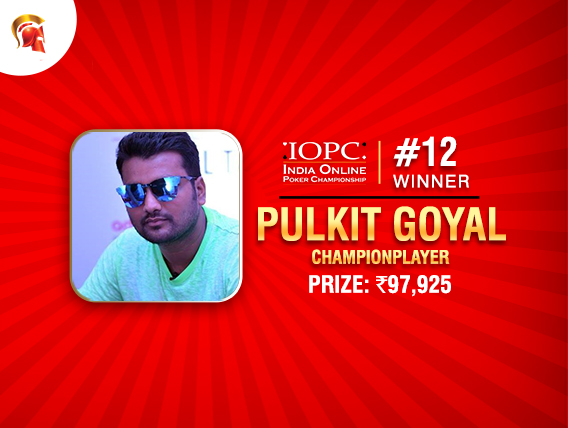 Yesterday was Day 3 of the record-breaking poker tournament series called India Online Poker Championship (IOPC), held on The Spartan Poker. Some of the best poker pros from across the country are also taking part in this series, as guaranteed prizes of INR 7+ crore are up for grabs across the ten days of this event.

The day began with popular Indian poker pro Vidwath Shetty winning his second title of the series. Shortly after that, Pulkit Goyal shipped IOPC Event #12 INR 4 Lac GTD (550 R+A), which kicked off at 2pm IST. Goyal plays under the username ‘Championplayer’, and he walked away with the top prize of INR 97,925.

The guarantee was beaten once again, with a massive field of 926 entries registering to this low buy-in tournament, with a new prize pool of INR 4.63 lakh being created. This allowed the top 31 finishers in the tournament to be paid out a minimum cash prize of INR 4,074.

Goyal held A-8 while Bounceez held A-5 as hold players went all-in after the river card opened. The board opened 3h Td 2s Ad Qh and both hit a pair of Aces on the turn, but Goyal was ahead with a higher kicker – 8. He won the pot and the title, as Bounceez was knocked out and had to collect the runners-up prize of INR 65,931.

Pulkit Goyal will now have his eyes on other events at the IOPC, five of which will take place today. Keep reading GutshotMagazine.com for timely updates on what’s happening at this online poker tournament series.