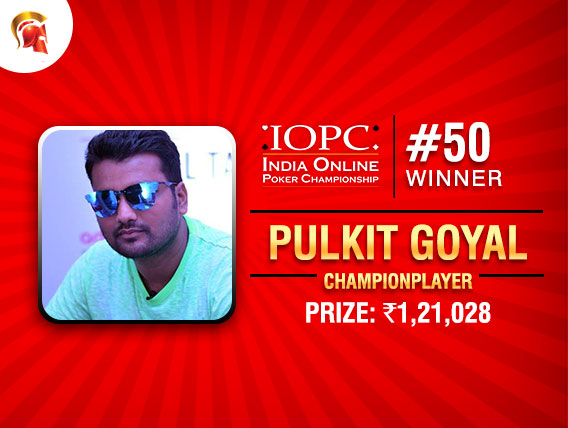 It was Day 10 and the final day of action at the India Online Poker Championship (IOPC), which offered a record-breaking guarantee of INR 7+ crore in prizes. The competition was heating up as players prepared for the mega IOPC Main Event, while also vying to finish on top of the IOPC Leaderboard, where a Jeep Compass was up for grabs.

The second tournament of the day was IOPC Event #50 INR 5 Lac GTD (880 R+A) and the tournament kicked off at 2pm IST, with the advertised guarantee being beaten once again, like it has several times in this series so far. 683 entries were registered to the tournament and a new prize pool of INR 5,46,400 was created.

Pulkit Goyal was one man who had his eyes on that IOPC Leaderboard top prize and he worked his way towards it right through the series. He began by shipping IOPC Event #12 a week back and then scored his second title just a couple of days back, winning Event #43. Yesterday, he beat this big field to ship Event #50 and record his third IOPC title of the series.

The top 27 players were able to finish in the money in this tournament, with a minimum cash prize of INR 5,464. It was Goyal playing under the username ‘Championplayer’, who received the biggest pay-check of all – INR 1,21,028. He beat ‘zeekay’ in heads-up, who also took away a decent prize of INR 81,627 for second place.

The tournament came to an end in Level #48, with the blinds at 32,000/64,000 – 6,400 and Goyal having a 5:1 chip lead over zeekay before the final hand was played. Goyal held Jd-7d and decided to go all-in pre-flop, and zeekay made the call with pocket fours. The board opened 2d-8d-9d-Tc-3c with Goyal hitting a J-high flush on the flop itself and zeekay’s pair of fours being no match for that!

This fantastic performance from Pulkit Goyal meant that he had accumulated enough of points on the IOPC Leaderboard to jump straight to the top and win the grand prize of a brand-new Jeep Compass from The Spartan Poker. What a happy man he will be! 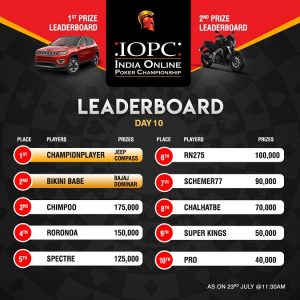