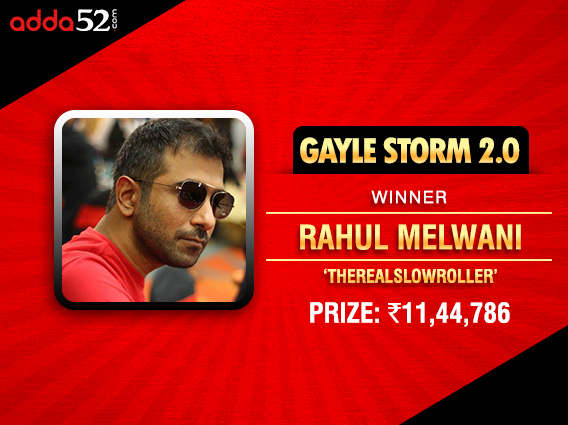 As we all know, the Universe Boss ‘Chris Gayle’ was recently signed on as Adda52’s brand ambassador and when that announcement was made, the company also launched a high-guarantee tournament call the Gayle Storm. After the success of the inaugural INR 50 lakh GTD Gayle Storm, they then announced the return of Gayle Storm 2.0, with an INR 75 lakh GTD prize pool.

This bigger and better tournament had been advertised by Adda52 for weeks and finally, the tournament was played on the night of 7th October. A massive field participated in the event, with over 600 entries coming by the morning of the tournament. Here, one player walked away with a life-changing prize money.

This player was Rahul Melwani who plays on Adda52 under the name ‘therealslowroller’. Not sure if he was slow rolling in this tournament, but we are sure that he ended victorious and walked away as a much richer man, pocketing the massive first-place prize of INR 11,44,786.

The Gayle Storm 2.0 offered high-value to the players, getting to be a part of the huge INR 75 lakh prize pool with a buy-in of just INR 2,500. As a result, a field of 2,457 entries registered to the tournament, and Melwani managed to come out on top of this field, with the tournament ending in the early hours of Monday morning.

Gutshot caught up with Melwani to ask him about the tournament experience. He said, “It was amazing value for money, with a pretty good structure and I had a whole lot of fun playing this tournament. I would recommend it to everyone. I bought in for just one bullet, so converting 2.5k to 11.4 L feels amazing. Will definitely be playing more on Adda52 from now on… Pretty good gaming experience.”