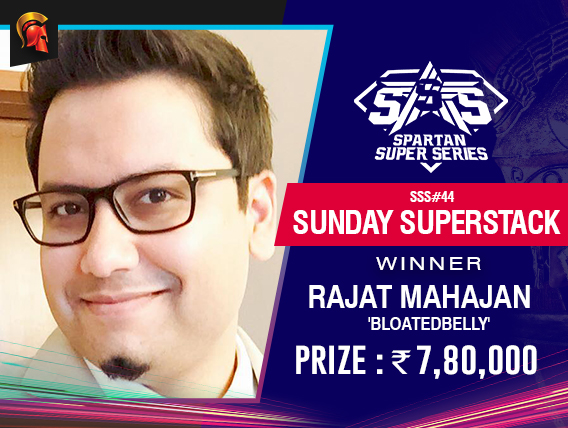 Yesterday, Spartan Poker hosted the final day of their monthly Spartan Super Series (SSS) and what a day it was! The series hosted its biggest tournament yesterday, the Main Event INR 75 Lakhs GTD, which was won by Rajesh Singh. The second biggest tournament of the day was the SSS #44 – Sunday SuperStack INR 30 Lakhs GTD, with a boosted guarantee for being under SSS.

The tournament began at 8 pm and attracted a total of 577 entries (including 88 re-entries and 206 re-buys) for a buy-in of INR 5,500. After a little over 9 and a half hours, the player to emerge victorious was regular Rajat Mahajan aka ‘BloatedBelly’, earning a cool INR 7,80,000 as the winning prize. He beat ‘THEDONKKID’ in heads-up to secure his victory.

The final hand on Spartan was a pre-flop all-in situation and Mahajan was marginally leading in chip counts. The final slash was dealt when THEDONKKID shoved his stack with Kc 7h and lost to Mahajan’s Ad Ks on the 8d 3c Ah 8s Jd board. Mahajan beat his opponent’s Eights with Aces and Eights and took home the coveted title and the outstanding cash prize with it. THEDONKKID settled for INR 4,80,000 as the runner-up cash prize.

Mahajan, having plenty of titles to his name from past tournaments, is not a new player to the scene by any means. His past title wins include the Spartan Sunday SuperStack in August last year. He had even bagged a chance to fly Europe, winning a Destiny tournament last September in its 6th iteration. Among his latest wins include the Flash, which he earned in October 2018. The amount he earned last night will surely be a great addition to his bankroll and he’ll be looking to repeat his victory in future tournaments too.

The top 50 positions were paid in the tournament for a min-cash of INR 15k and some of the regs to earn a pay-check on Spartan include Abhishek Rathod (10th), Srihari Bang (23rd), last night’s Adda52 Mega Suits winner Gaurav Sood (31st), Goonjan Mall (35th), Laksh Pal Singh (40th), Sagar Choudhury (48th), Sahil Mahboobani (50th) and others.

Keep reading GutshotMagazine.com for more such tournament results and updates from India and from around the world.