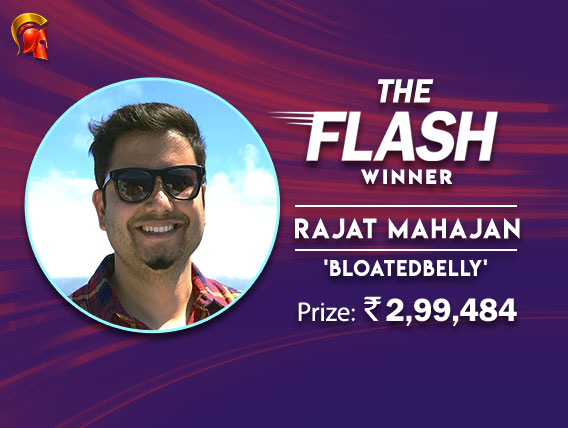 Rajat Mahajan beats 354 entries to win The Flash on Spartan

Thursday nights on The Spartan Poker means a very popular tournament called The Flash is about to take place. Yesterday was a national holiday due to the festive occasion of Dussehra and because of that, last night’s tournament on Spartan witnessed a much bigger participation than usual.

The Flash INR 12 Lakh GTD kicked off at 7:30pm with a buy-in of INR 4,400 but it was a much shorter tournament that we usually witness. Last night’s featured tournament lasted less than 5 hours long, with the grind coming to an end at 12:23am this morning and Rajat Mahajan aka ‘BloatedBelly’ being declared the winner.

By the end of the registration period, The Flash had attracted a field of 354 entries and this beat the guarantee to create a new prize pool of INR 14.16 lakh. From here, the top 31 players were paid out with a minimum cash prize of INR 12,461, while Mahajan took away the biggest pay-out of INR 2,99,484.

The high participation last night gave Mahajan a much bigger prize than he would’ve originally imagined, while ‘Barrel_57’ would’ve also been a happy man at the end of the night. He lost to Mahajan in heads-up but still managed to take home a decent pay-check of INR 2,01,638.

Level #39 is when the tournament came to an end, with the blinds at 10,000/20,000 – 2,500. By then, Mahajan had more than a 2:1 chip lead against Barrel_57 coming into the final hand. The latter shoved all-in before the flop with Qs Kd and Mahajan called with 6c Ad. The board ran out 2d Ts Tc Qd Ah and both players hit two pairs; Mahajan won with Aces and Tens over Queens and Tens.

Mahajan has been on quite a roll in recent times in online poker. In the last couple of months, this became his third featured tournament title on Spartan, having won the Sunday SuperStack in August and also the Destiny in September. Recently, he won the Judwaa tournament on Adda52 too.