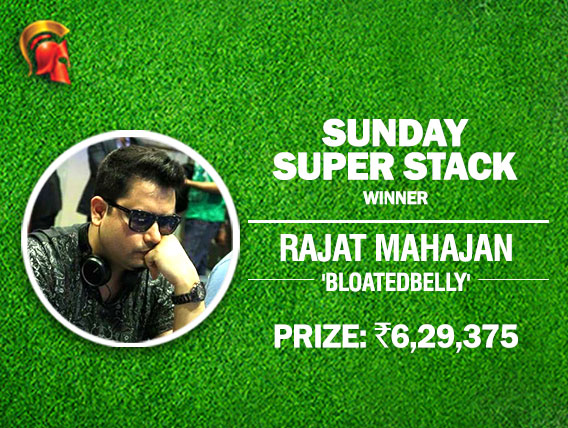 Yesterday was truly a Super Sunday on The Spartan Poker, with big online tournaments like Big Daddy and the Sunday SuperStack taking place, in addition to the monthly Two of a Kind tournament. Players turned up and participated in big numbers as huge prizes were up for grabs.

One of these tournaments was the weekly Sunday SuperStack, which is one of Spartan’s most popular featured tournament. With a buy-in of INR 5,500, players get to be a part of the INR 20 lakh GTD prize pool, and this guarantee is almost always beaten. Yesterday too, 475 entries were registered, which created a prize pool of INR 23.75 lakh.

40 players were paid out a minimum cash prize of INR 14,250 and after 7 hours and 24 minutes, a winner was declared in Rajat Mahajan who plays under the name ‘BloatedBelly’. He beat ‘CorazonDeAces’ in heads-up and took away a massive prize of INR 6,29,375 for first-place.

With nearly a 5:1 chip advantage, Mahajan was trying to push on the advantage and went all-in pre-flop with Ah 6h in what turned out to be the final hand. His opponent called with pocket Nines, holding the lead with the first four cards opening 4d Qd 2c 4c. However, As on the river gave Mahajan a higher pair and the final pot as well. CorazonDeAces fired four bullets to reach this stage and took home the runners-up prize of INR 3,91,875.

Gutshot had a word with Mahajan after he shipped this major tournament. He told us how he was introduced to the game of poker, saying, “I started playing poker several years ago with friends, but only cash games. We used to play Rs.500 buy-ins, with 5-10 blinds. I started higher stakes about 3-4 years back. I got into online tournament poker last year around July. At first, I was really bad at it – playing super loose, spewing around money. However, I got more disciplined with time.”

Speaking about the tournament itself, he said, “The Spartan Poker’s Sunday SuperStack tournament is one of the most prestigious ones in the Indian circuit. The structure is superb – I always prefer playing deep stack tournaments which have room for manoeuvering. I ran quite good early on, made some good bluffs and was chip leading or in the top 5 stacks throughout the tournament, till we were 18 left.”

“When we were 9 left (on the FT bubble), I remember playing a very decisive hand. I had approx 20-22 BBs left, we were 5-handed on my table, where it was folded around to me on the SB and I had AJ off. I raised 2.3x and got called in the BB. I don’t remember how the action went, but I faced an all-in/overbet on the river with board K 9 7 x 5. I called within a few seconds and my Ace high was good (the BB had J high). It felt so good to make the hero call there, especially at such a critical time!”

Talking about his future plans in the game of poker, Mahajan said, “I’m currently playing only twice/thrice a week, that too a few selected tournaments on Spartan, PokerBaazi and Adda52. I’m trying to build a bankroll to start playing live tournaments in the near future. Till then, I’m going to focus mostly on online tournaments and try to find more consistency and incorporate more discipline.”