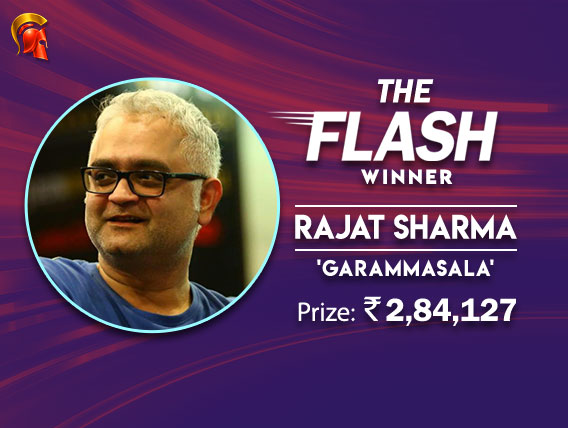 Rajat Sharma wins again on Spartan – The Flash this time!

As for Rajat Sharma, he’s a known name in the Indian poker industry for a few years now. He’s also one who takes part in the daily grind across platforms, and often converts deep runs into tournament victories. On Spartan however, he’s bagged several featured tournaments, adding one to his list yesterday.

He’s on a mission to win them all and last night took him one step further. The Flash INR 12 lakh GTD has a buy-in of INR 4,400 and is played every Thursday night on Spartan. Yesterday’s massive participation of 387 entries took the prize pool up to INR 13,88,000 and from these, the top 31 places were paid out a minimum of INR 12,214.

Starting at 7:30pm last evening, the tournament took a little over 5 hours before wrapping up at 12:52am this morning. Outlasting the field that consisted of many Spartan regulars, Sharma shipped the tournament and made a very handsome bankroll addition of INR 2,84,127 last night.

Among those who finished in the money included Shravan Chhabria (27th) who won Maverick on Adda52 the night before, Siddharth Karia (22nd), Kartik Ved (19th) who recently won the SSS Main Event, and Pulkit Goyal aka ‘Championplayer’ (10th). ‘Tiger10’ finished 4th for the first 6-figure prize of the night – INR 1,12,983.

Eventually, Rajat Sharma who plays under ‘Garammasala’ found himself in heads-up against ‘7vik’ and it wasn’t long before the former was crowned champion. Sharma had gained an 8:1 chip lead in heads-up which was followed by another pot of 72,000 chips after 7vik folded to a pre-flop all-in from Sharma. That’s when the two agreed on a deal and 7vik was awarded INR 2,07,085 for finishing second, based on their current chip stacks.

For more updates on the top Indian poker tournaments, both online and live, keep reading GutshotMagazine.com.