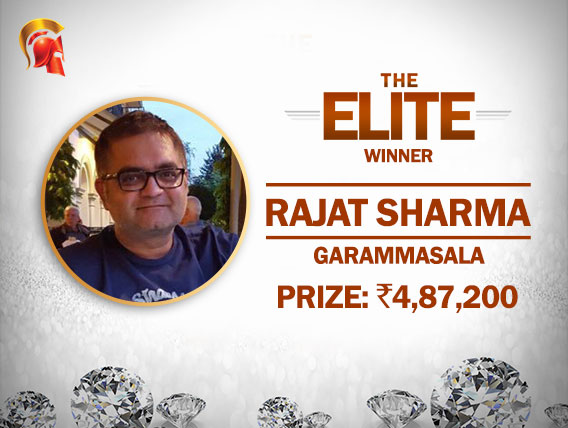 Rajat Sharma emerged victorious in the Elite tournament at The Spartan Poker last night for INR 4,87,200. Sharma who plays under the moniker ‘Garammasala’ outlasted 203 entries in the tournament to take first place. A private banker by profession, Sharma is based in Gurgaon, Haryana. He has been playing poker since 3-4 years now and has had string of good scores both in live and online poker.

Speaking with Gutshot, Sharma said, “I love the 6-Max format and The Elite is one of my favourite tournaments and I try not to miss it. Of course it’s always more fun when you end up winning a big tournament like this.” About the tournament itself Sharma was modest about the whole thing, “I just ran well and guess I luck-boxed my way to winning The Elite. (laughs) I got into many hands against Nishant ‘FunkyouFTW1’ Sharma who I respect tremendously as a player and as an opponent on the final table and I was lucky enough to win almost all those pots.”

About his plans for the game in the near future, “Poker plans… nothing much, just going to grind the full schedule of Spartan Super Series right now.”

Coming back to the Elite tournament, the winner was declared in the Level #39 with blinds running 10,000-20,000-2,500. Sharma’s headsup opponent ‘Jameson123’ had Ks Qd while ‘GarammasaIa’ was holding 2s Kd. Both the heads-up opponents made a pre-flop all-in to see the showdown 7c 6d Ad 9c 2h. The river 2h gave a pair of Twos to Garammasala and the Elite title.