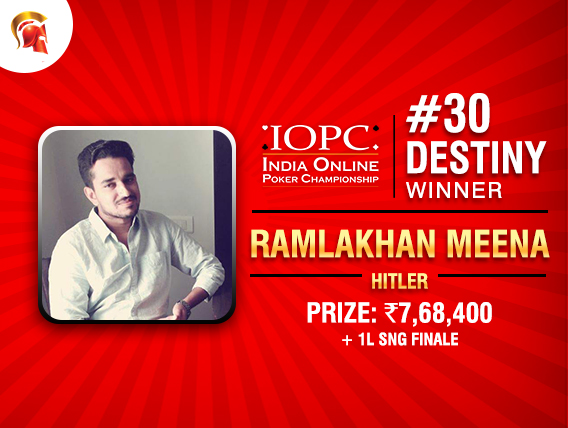 Poker players from around the country tune in to The Spartan Poker every day as India’s biggest online poker tournament series is currently taking place. The India Online Poker Championship (IOPC) is scheduled between 13-22 July 2018 and yesterday was Day 6 of the series.

Yesterday being a Wednesday, the popular Destiny tournament was hosted on Spartan, with a special increased guarantee of INR 25 lakh for the IOPC. IOPC Event #30 Destiny INR 25 Lac GTD (5500 RE) kicked off at 7:30pm IST and a great participation was witnessed.

668 entries took part in the tournament, crushing the guarantee and upping the prize pool to INR 33.4 lakh, where the top 60 players were paid out a minimum cash prize of INR 13,360. Everyone would’ve wanted to top this event as the Destiny tournament series also gives one of ten weekly winners a chance to win a free package trip to Europe!

Ultimately, the tournament was shipped by Ramlakhan Meena aka ‘hitler’, who beat all the entries to take home a massive prize of INR 8,68,400. One lakh will be deducted from his winnings for a seat into the Destiny SnG Finale, where the ten Destiny winners will play for a free package trip to play at a prestigious poker festival in Europe.

Coming in second place was Anurag Srivastava aka ‘InvestmentBanker’, who was also awarded a big cash prize of INR 5,34,400. It’s been a good period for Srivastava in online poker, as he also shipped the Big Daddy tournament on Spartan a couple of weeks back, taking home nearly a lakh rupees and a package trip to Goa.

Gutshot caught up with Meena after this big win. He’s a 25-year old poker player from Jaipur, who has graduated from IIT Roorkee and is currently waiting for his joining as an income tax inspector. He spoke to us about his introduction to poker and his future plans as well.

“I have been playing poker since 2013. During college days, our group used to play a card game called Sheep. One of my friends suggested us not to waste our time in a game where there is no future. He introduced all of us to a game called poker and we all started playing in our hostels. After one and a half year, one of our friends introduced us to online poker site and from that day, my online grinding began. I don’t have many plans as after a while, I will become a government servant and they are not allowed to play poker.”

Keep reading GutshotMagazine.com for similar reports on big poker wins from around the world.