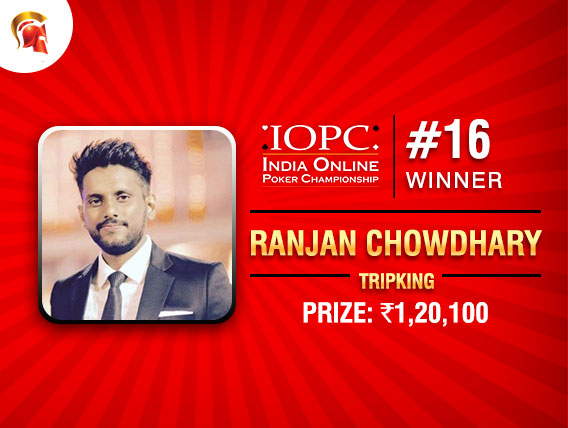 Yesterday was an extremely busy day on The Spartan Poker, with a number of high-guarantee tournaments taking place, including the INR 10 lakh GTD Big Daddy tournament, the INR 30 lakh GTD Sunday SuperStack tournament and the mega INR 1 crore GTD The Millionaire tournament.

After such big tournaments, the day ended with a smaller tournament – IOPC Event #16 INR 4 Lac GTD (1100 RE). It started at 9:30pm IST and the guarantee was smashed, with a new prize pool of INR 5.99 lakh being created. This was due to 599 registered entries and the top 39 players were paid out a minimum cash prize of INR 4,133.

The tournament went on till the early hours of today morning and at the end of it all, Ranjan Chowdhary was crowned champion, who plays under the username ‘tripking’. He beat ‘Spartan_Special’ in heads-up and took home the top prize of INR 1,20,100 while Spartan_Special took home INR 79,847 for second place.

Spartan_Special had the lead with Eights and Tens when the flop opened 8-Q-10, but a Q on the turn gave Chowdhary a pair of Queens and Jacks as the Ace on the river turned out to be inconsequential and Chowdhary was able to take down the pot and the IOPC Event #16 title.

A total of 55 IOPC tournaments like this are scheduled between 13-22 July so stay tuned to GutshotMagazine.com for regular updates from tournaments taking place at the Indian Online Poker Championship.