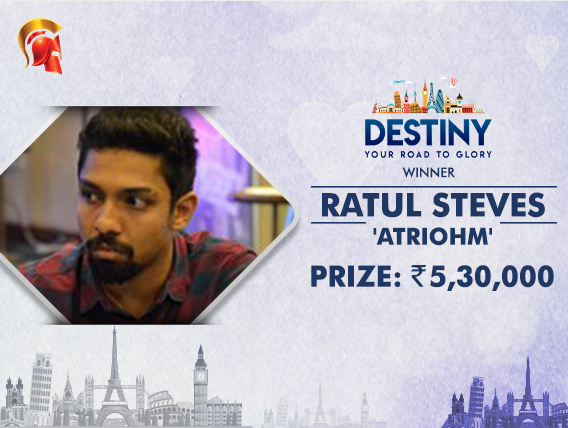 Yesterday was yet another successful day at The Spartan Poker. Their feature tournament for Wednesday, Destiny 7.0 INR 20 Lakhs GTD has a humongous guarantee for a buy-in of INR 5,500. The series is now running its 7th edition on Spartan.

Spartan gives you the chance to write your own destiny through their Destiny tournaments, where a 10-max Finale SnG will be conducted on 3rd February 2019 for the winners of each of the 10 Destiny 7.0 tournaments. The SnG will be played for the INR 10 Lakhs package to one of Europe’s prestigious poker festivals.

Last night’s Destiny attracted a nice 399-strong entry field (73 re-entries and 142 rebuys) and began at the usual 7:30 pm in the evening. The top 40 places were paid for a minimum cash prize of INR 12,000 and the player to emerge victorious at 3:14 am today morning was Ratul Steves aka ‘Atriohm’ who took home a staggering amount of INR 5,30,000 as 1st place cash prize.

He beat another well-known grinder Utsav Taneja aka ‘FindDaGrind’ in the heads-up battle to claim his prize. Taneja also took home a sizeable amount of INR 3,30,000 for finishing runner-up and has seen plenty of wins in his career too, the biggest of which was October’s edition of the 2oK on Spartan.

The final hand of the tournament was an interesting one. After the blinds were posted, Taneja called Steves’ re-raise to 135,000 chips pre-flop. The flop came to 9s 5h 2d and Steves bet another 247,050, and his opponent called again. The Td turn card saw Steves make the top pair with his Jc Ts, he bet another 411,750 and his opponent called, who was looking for a diamond flush with Jd 5d. The river of Qh saw Taneja missing his flush and bluffing it all, shoving all-in to which Steves made the call. In the showdown, Steves’ top pair was enough to beat his opponent’s 5-pair and he was the ultimate winner of the tournament.

Steves is a well-known player in the Indian circles and has a good history in the past, with good performances in live as well as online poker. This is his second Destiny win, winning the first in August this year. He wasn’t successful in winning the SnG Finale that time, but with this win, he has bagged another shot at winning the Europe trip on Spartan, and he’ll be aiming straight for the package this time.

Others included in the money were Ashish Ahuja aka ‘Spewushhhiiiii’ (16th – INR 18K), Neel Joshi aka ‘Worm33’ (21st – INR 16K) and Sumit Sapra aka ‘mrgr33n’ (23rd – INR 16K). As for Steves, this would’ve been a very happy outing, completing a big win during the festive Christmas season. Keep reading GutshotMagazine.com for more tournament updates, announcements and general poker news from around the world.