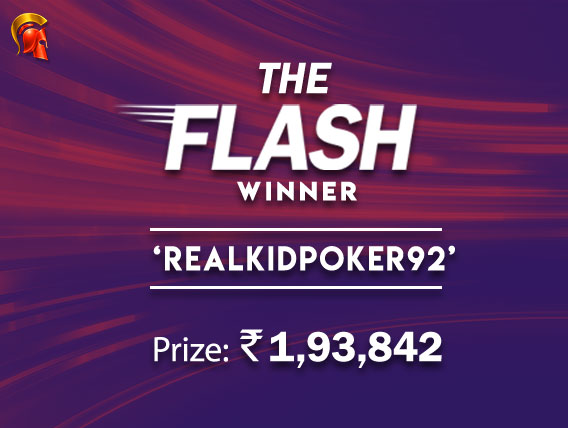 ‘realkidpoker92’ wins after 4-way deal in The Flash

The Spartan Poker always has some of the best online poker tournaments and promotions up and running. A part of their featured online tournaments is The Flash INR 12 Lakh GTD, a re-entry tournament which has a buy-in of INR 4,400 and is played out every Thursday night at 7:30pm.

The Flash always sees a tough field and yesterday was no different, eventually needing a 4-way deal on the final table to end the tournament. 253 entries registered to the event and of these, only the top 23 were paid out with a minimum cash prize of INR 13,920.

The four players included ‘realkidpoker92’, ‘showstopper89’, ‘CalvinKliein’ and ‘Ak53’. There wasn’t much differences in their stacks, so they all walked away with similar prizes, with realkidpoker92 was declared as winner of the tournament, taking home INR 1,93,842 for first place.

showstopper89 had the next best chip stack and this player won INR 1,77,051 in prize money, followed by CalvinKliein who finished third for INR 1,64,479 and Ak53 who finished fourth for INR 1,61,827. All these players would’ve been proud of their achievements as they beat a tough field to be among the top prizes.

Finishing in 6th place was Sagar Choudhury aka ‘Strangeplay’ who took away a prize of INR 64,200. On PokerBaazi, he had a better outing, winning The Summit for a massive top prize of INR 2.75 lakh after going through a field of 150 entries that included some top Indian pros.  Keep reading GutshotMagazine.com for more updates on the top Indian poker tournaments.