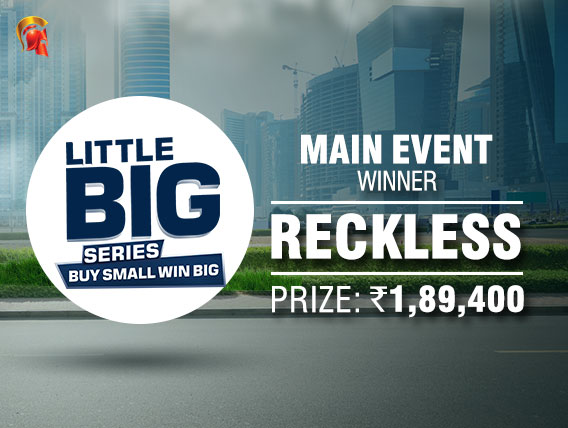 The action at The Spartan Poker this weekend was all about the conclusion of the Little Big Series (LBS) May edition. The featured tournament to close the series was of course the LBS Main Event which guaranteed INR 10 Lakhs in prizepools for a buy-in of just INR 880. The tournament saw a participation of 1,178 entries. The eventual winner was ‘Reckless’ taking down ‘The Bomb’ which is what this LBS Main Event was called and INR 1,89,400 for first-place prize. Along with the Main Event, there was an LBS leaderboard where ‘Pogback’ claimed top honours along with a cash prize of INR 50,000 as well as free tickets to the next Two of a Kind (2.o.K) which will be held on 3 June and The Millionaire scheduled on 10 June at The Spartan Poker.

Let’s take a quick look at final day’s action from the LBS:

The showstopper of the series was this Main Event a.k.a The Bomb which giving away 10 Lakhs on a buy-in of INR 880. ‘Reckless’ emerged victorious in the Main Event outlasting 1,178 entries for INR 1,89,400. ‘Reckless’ defeated Spartan online reg Pulkit ‘Championplayer’ Goyal in the final round of the tournament. Goyal collected INR 115,900 for his second place finish.

202 participants came together to play the third last tournament of the series where ‘vanPershing’ claimed the title for INR 17,612. ‘vanPershing’ outlasted ‘zeeke’ in the last round of the tournament where the second place finisher took home INR 11,900 for the finish.

The second last tournament of the day drew 255 entries to make a prizepool of INR 51,000. The prizepool was collected by top 11 places with a min-cash of INR 1,275. ‘TopDonk’ outlasted these entries and ‘ziggyluck’ in the heads-up battle to claim the first place in the tournament. The first place finisher ‘TopDonk’ collected INR 14,025 while the second place finisher took INR 9,971 for the finish.

The Progressive Knockout tournament saw 247 entries in the tournament which was taken down by ‘psyentist’ for INR 21,150. ‘psyentist’ defeated ‘mdtanvir1591’ and the latter collected INR 14,240 for the finish.