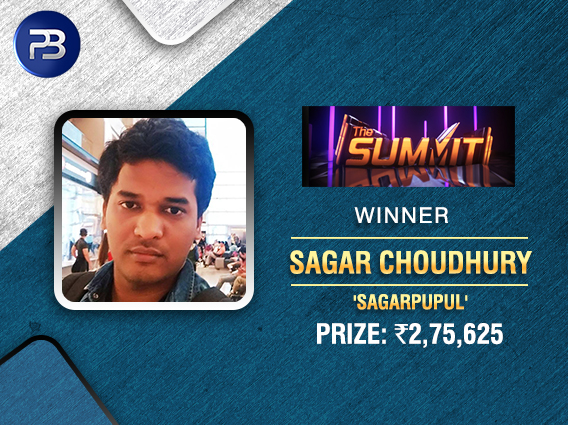 Thursday night are always good on PokerBaazi because poker players around the world get to take part in The Summit MonsterStack Turbo INR 10 lakh GTD tournament, where you can win thousands with a buy-in of INR 8,250. This happens to be one of PokerBaazi’s most popular online tournaments.

Last night, it kicked off at 8pm and as usual, the guarantee was broken. 150 entries including 84 players and 66 re-entries joined the tournament to create a new prize pool of INR 11.25 lakh. Eventually, the top 13 players from this field were paid out a min-cash of INR 28,125.

What a packed final table we witnessed last night where eventually, it was Sagar Choudhury aka ‘sagarpupul’ who took down the title. However, he had to get through some of India’s top pros before taking away the top prize of INR 2,75,625 – a very well-deserved prize.

In heads-up, he beat another top pro Abhinav Iyer aka ‘griezmann’ who is used to winning titles across all the major platforms in India; he took away the runner-up prize of INR 2,08,125. In third place was Neeraj Kumar aka ‘SelfClaimedPro’ who recently took down The Big Monday on PokerBaazi.

More pros were at this final table including Sahil Mahboobani aka ‘ImHighIshove’ who finished fourth for a 6-figure score as well. It doesn’t end there. In fifth was Rajat Sharma aka ‘LungFakeer’, someone who has been doing well across all platforms, recently having won the Mega Freeze on Spartan.