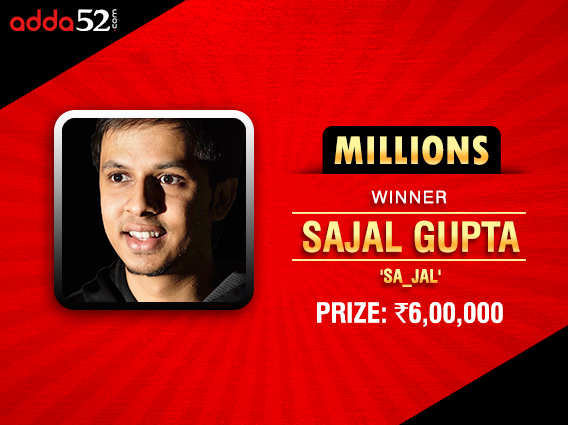 The Adda52 Millions is one of the most popular Sunday grind online poker tournaments in India, with a high guarantee and a huge first-place prize as well. You can find India’s top poker players participate in this one each Sunday, where a few walk away as much richer people by the end of the night.

Yesterday, the Millions began at 8pm on Adda52, and the INR 11,000 speaks a lot about the tough competition that there may in this tournament. The tournament is now in the 6-Max format and a total of 166 entries (114 players + 52 re-entries) registered to play in it last night.

You have to be one of the best in the business to be victorious in the Adda52 Millions and last night, it was Sajal Gupta aka ‘sa_jal’ who turned out to be the best from among this field. A total of 12 players were paid out and the big prize pool allowed the top 6 players to take home 6-figure prizes.

Gupta was the player to win the largest chunk of this prize pool, getting paid out INR 6 lakh for beating another top pro in heads-up and finishing first in the tournament. The tournament ended at 4:12am after over 8 hours of grinding and Gupta was rewarded well for this vigil.

Remember, Gupta isn’t new to winning poker tournaments online, as the player has also topped the IOPC Leaderboard on Spartan earlier this year, for which he was awarded with a brand-new Jeep Compass, to go with tournament winnings throughout the series. In yesterday’s Adda52 Millions, he beat Akshay Nasa aka ‘vibaks’ in heads-up, who was also rewarded handsomely for finishing second, winning INR 3.8 lakh. In third place was Devang Yadav aka ‘spark123’ who won INR 2.65 lakh while Harshit Chopra aka ‘hashstack’ finished 4th for INR 2.1 lakh.

Gutshot caught up with Gupta after he took down this major tournament and he seemed delighted with the victory. He said, “Winning Adda52 Millions is always a special feeling. The later stages of this tourney probably see the toughest field in Indian poker and it feels good to be able to come out on top. Cheers.” Keep reading GutshotMagazine.com for similar Indian poker tournament updates.