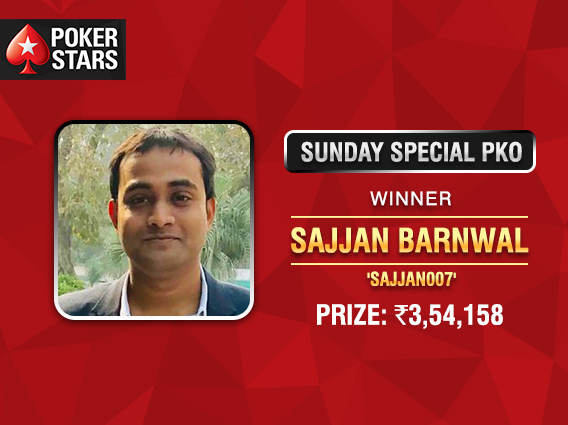 PokerStars, a giant in the worldwide poker industry, had launched their Indian arm – PokerStars India – back in April of last year and subsequently launched major events and series on their Indian platform which became a popular fixture for the poker masses of this country.

Yesterday’s feature tournament on PokerStars was the Sunday Special NLH Progressive KO which had INR 15 Lakhs in guaranteed prize pool. The event had a buy-in of INR 5,000. The Progressive Knockout was the unique feature of the tournament, which meant that 50% of the buy-in went to fund each player’s initial bounty, and when a player elminates another player, he pockets half of the latter’s bounty.

Last night’s Sunday Special PKO attracted a total of 288 entries (125 re-entries) and the winner to emerge from the field was well-known online grinder Sajjan Barnwal aka ‘Sajjan007. He took home INR 1,60,606 as the 1st place cash prize as well as additional INR 1,93,552 as bounty. His total earnings in the Sunday Special came to INR 3,54,158. He fired two bullets to bag this tournament which is his favourite format too.

Barnwal has lot of cashes accumulated in his previous runs on various platforms. His recent win was at the PPL Winter, where he won BSS MegaStack on the last day of the series for INR 1,40,500. Now with winning such a large amount yesterday, he is surely looking forward to using his brand-new bankroll addition to ship a few more events in the action-packed January for his pleasure.

The 2nd place finisher ‘VaahBhaiVaah’ took home INR 1,17,724 as his cash prize but took only INR 6,256 as bounty. That’s the unique aspect of this format that players can maximize their winnings on two counts, knocking out others as well as ranking in the tops. Hence. this format gives added incentive to the players.

Keep reading GutshotMagazine.com for more such tournament results, updates and general poker news from around the world.