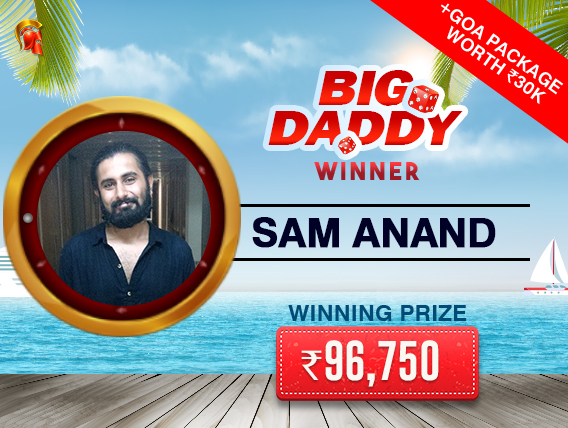 Sunday is always a good time to be a poker player as the biggest and best guaranteed prize pool tournaments take place. Similarly, The Spartan Poker hosts a number of big tournaments each Sunday and the Big Daddy tournament is one of them, where a massive INR 5 lakh GTD prize pool is up for grabs with a buy-in of just INR 550.

The specialty of the Big Daddy tournament is that the winner doesn’t just walk away with his tournament winnings, but he is also awarded a free package trip to Goa, to play poker in the Big Daddy Casino, including return flight tickets and hotel stay, for a chance to make even more money.

Yesterday’s tournament began at 4pm IST and around 5 hours later, we had a winner in regular online player Sam Anand aka ‘Lokimon’. A total of 772 entries registered to the tournament and 63 places were paid out a minimum cash prize of INR 2,175, with the winner walking away with the top prize of INR 96,750.

Gutshot caught up with the winner to ask him how he felt about this victory. “This was, by quite a margin, the biggest field I’ve won over. So while not the biggest score, it was still extremely satisfying and special,” he said. When asked about the competition he faced on the final table, he said, “I had a lot of fun once 3 way with “Basket” and “Sahil_batra” with almost identical stacks for all of us with a huge payout difference for 1st place cause of the added value from the Spartan package. Both were tricky opponents, we exchanged chipleads at points, especially heads up where I went from a big chiplead to the other extreme thanks to a really dry spell of cards, but did manage to close it once that levelled out a bit.”

“For a 500 buy-in, the 5L GTD is incredible by itself. Spartan manages to make it a lot sweeter with a bonus Goa package to the winner, which is as relevant as it gets for poker enthusiasts. Definitely one of the most looked-forward-to tourneys each Sunday. Thanks Spartan. Thanks a lot, Dwayne Fernandes and Gutshot Magazine,” he said on a parting note, about the Big Daddy initiative by Spartan.

Tonight’s featured tournament on The Spartan Poker is the Mega Freeze and you can get all updates on that tournament here on GutshotMagazine.com.