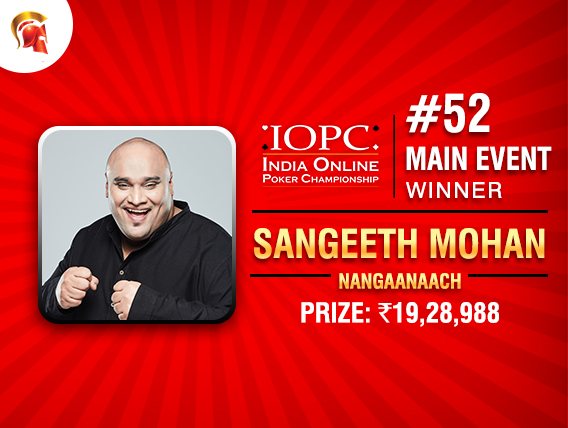 The current edition of the prestigious India Online Poker Championship (IOPC) was a 10-day long series on The Spartan Poker, and the much-awaited Main Event was scheduled for the final day. After ‘The Millionaire’ (won by Nikhil Ramesh), this was the only other tournament with a mega guaranteed prize pool of INR 1 crore.

IOPC Event #52 Main Event INR 1 Crore GTD (11000 RE) was a huuuuuge tournament for Indian poker players across the country and it kicked off at 4:30pm IST yesterday, eventually getting 1,011 entries.

The guarantee was beaten, and the top 95 players were paid out a minimum cash of INR 29,855. It was a very long grind of nearly 11 hours before a winner was crowned at 3:13am today morning. It was a Spartan tournament and coincidentally, it was former Spartan Pro Sangeeth Mohan aka Samoh won the ME, playing under the username ‘Nangaanaach’.

The popular player beat ‘JaiBalaji’ in heads-up and he couldn’t have had a better Sunday than this, taking home a massive amount of INR 19,28,988 for first place, becoming the second biggest win of this IOPC series.

The grind finally ended in Level #59 of the tournament, with the blinds running at 35,000/70,000 – 7,000. Mohan had created a 3:1 chip lead in heads-up, by the time the final hand was played. In that final hand, JaiBalaji pushed all his chips into the board when he saw his hand of Ad Kd.

Mohan held pocket Kings and made the call immediately. It was a brilliant hand to end the highlight tournament of the India Online Poker Championship, as the board opened 3s 9c 4s 4h 5d. Only an Ace on board would help JaiBalaji, but he only managed a pair of fours as Mohan took down the pot and the prestigious title, with two pairs – Kings and Fours. JaiBalaji also received a whopping INR 11,90,958 for the runners-up prize.

Gutshot caught up with Mohan to ask him how he felt about this big online victory. He said, “It was great. I ran pretty good, obviously. I had Akshay Nasa, Kavish Kukreja, etc. on my table towards the end, but it kind of worked out.”

“On the Final Table, button opens and I flat KK from SB, hoping Nasa, who was the shortest with like 15BB, would shove. It worked to plan because Nasa shoves, button reshoved and I got to bust both to take a huge chip lead,” he said, recounting a key hand from the final table.