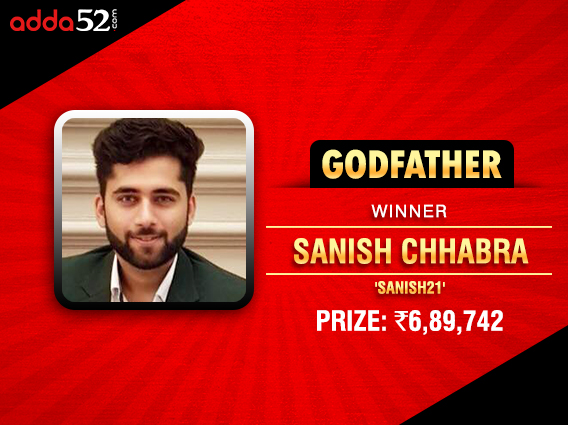 The Universe Boss Chris Gayle was signed as the ambassador of leading poker company Adda52 a few months back and his presence has been doing good for the company so far. They recently hosted a Diwali poker party with the cricketer, while also naming a tournament called ‘Gayle Storm’ after him.

After two successful editions, Gayle Storm 3.0 INR 50 lakh GTD was hosted on Adda52 yesterday, giving users the chance to be a part of this massive prize pool with a relatively low buy-in of just INR 2,500. Apart from other high-value tournaments running yesterday, this one turned out to be a hit as well.

By the end of the registration period, a massive field of 1,847 entries had joined the tournament, including 1,017 players and 830 re-entries. What began at 5pm yesterday evening wrapped up at 2:36am this morning after a grind of over 9.5 hours with 197 players getting paid out a minimum cash prize of INR 9,353.

Even though it was such a vast field, some of the regular Adda52 players still managed to find their way into the top prizes and that’s when you know that poker is truly a game of skill. Popular pro Sumit Sapra aka ‘Hammer_Head’ finished 15th for around INR 29k while Arjun Agrawal aka ‘arjunagrawal05’ and Apratim Sharma aka ‘checmate’ finished 13th and 12th respectively for around INR 40k each.

Akshay Nasa aka ‘vibaks’ is another name who is always among the money finishes on Adda52 and he reached the Final Table here as well, eventually busting in 8th for a prize of INR 78k. Eventually, the tournament ended when the final two players were evenly stacked, and they decided to chop the prize pool, with one player slightly ahead of the other.

Sanish Chhabra was that one player who was ahead, playing under the username ‘sanish21’ on Adda52. He took away the massive top prize of INR 6,89,742 while the second-place finisher wasn’t too far behind, winning INR 6,69,391 for finishing runner-up. This player was Naren Purohit aka ‘IMUNAGI’, another Adda52 regular who also won an Ace Race Leaderboard for his consistency in September.

Gutshot caught up with both these biggest winners of the night. Chhabra said, “It’s probably the best feeling, winning such a big tournament and beating such a massive field. It’s a great motivator for my game. All the people on FT were great and the biggest competitor goes by the name IMUNAGI (Purohit). GG bro. And yes, it’s my biggest online cash.”

On a parting note, Chhabra left us with his motto in poker, saying, “Ego and overconfidence is your worst enemy in Poker. #keepgrinding.” Keep reading GutshotMagazine.com for more updates on India’s biggest and best online poker tournaments.

We also had a word with Purohit, who said, “It always feels good when you score well in a tournament. We’re taking about Gayle Storm with that massive field and the kind of value we are getting made it an amazing experience for me. I would definitely recommend everyone to play Gayle Storm for that insane value. Heads-up battle didn’t last long because we both had almost same chip stack and it was a long grind for both of us so we decided to chop.”