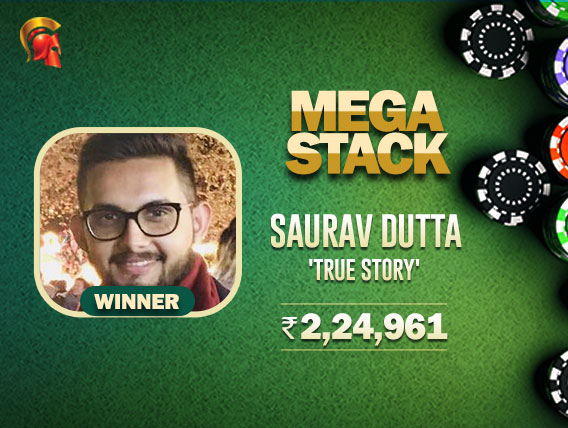 Most of the best poker players in India look forward to The Spartan Poker‘s daily featured tournaments, with varying buy-ins and varying guarantees across the week. Yesterday was Tuesday and the featured tournament was the INR 10 lakh GTD Mega Stack tournament, which began at 8:30pm IST.

The recent IOPC may have brought on board many new players to Spartan and that continued the trend of the guarantees being beaten. 374 entries registered to the tournament and a new prize pool of INR 11.22 lakh was generated, which was distributed among the top 39 players with a minimum cash prize of INR 7,741.

He faced off against ‘gmtesting’ in heads-up, where he got to a chip lead of 2.5:1 before the final hand took place. gmtesting shoved in the remainder of his stack pre-flop with Ad 8h, while Dutta made the call with pocket threes. gmtesting needed to hit 8 or A on the board if he wanted to stay alive.

The board opened up 9c Kc Qh 6c 9s, which meant that gmtesting couldn’t improve on his hand, while Dutta added to his pair of threes and won the pot with two pairs – Nines and Threes. He would’ve been delighted with this win, while gmtesting walked away with the runners-up prize of INR 1,49,562.

Gutshot caught up with Dutta at the end of this tournament and the 27-year old poker player told us a little bit more about himself. He has done an M.Sc. in Finance and was introduced to poker at the age of just 18. Following that, he played the game throughout his years at university.

When asked about the Mega Stack victory, he said, “I started the tournament like any other. I just played tight and played the right hands against the right people. For now, I don’t have any future plans in the online poker space as I’ve always played the game only as a hobby.”

Keep reading GutshotMagazine.com for similar updates on live and online poker tournaments from across the country.