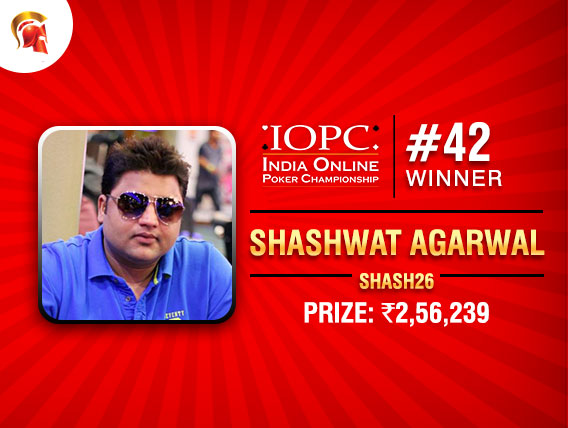 For months, poker players all over the country were waiting for the start of the India Online Poker Championship (IOPC) on The Spartan Poker. The tournament series began and yesterday as Day 8 of the series, where six IOPC tournaments were played through the day.

The fourth tournament of the day was IOPC Event #42 INR 12 Lac GTD (3300 RE). It kicked off at 9pm IST and most players who busted early in The Flash featured tournament registered to this tournament. The tournament had a buy-in of INR 3,300 and a 12 lakh GTD prize pool.

As we’ve witnessed throughout the IOPC series so far, 426 entries beat the guarantee and the top 39 players were paid out a minimum of INR 8,818. After hours of grinding on the virtual felts, Shashwat Agarwal aka ‘Shash26’ shipped the tournament and took home the top prize of INR 2,56,239.

It was his first title of the series but it wasn’t the first top-two finish for the runners-up of this tournament, ‘alienrobot’. The tournament ended in Level #45 and the blinds running at 24,000/48,000 – 6,000, with Agarwal and alienrobot facing off in the heads-up battle. Agarwal’s Ace-high flush beat his opponent’s Aces and Kings in the final hand and alienrobot had to settle for the INR 1,70,357 prize for second place.

Gutshot caught up with Agarwal after this big victory to ask him how it feels. “The Spartan Poker, thank you so much for the opportunity to showcase my Poker skills. It has been a pleasure playing on your portal. Looking forward to future opportunities as well,” he said.

He however, hasn’t been able to make it to the IOPC Leaderboard as yet, with just two days of play to go. Keep reading GutshotMagazine.com for all poker-related stories.
Tagged : IOPC, Online poker, Shashwant Agarwal, Spartan