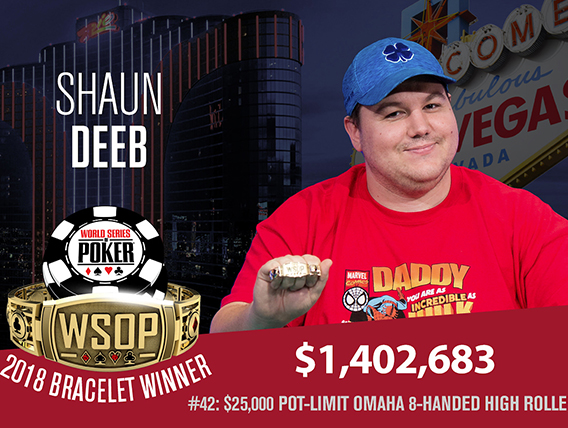 One of the greatest online pros in the history of the internet gambling won his third bracelet, Shaun Deeb binked his third WSOP event since 2015 and he added $1.4 million to his bankroll in the process. Deeb has now picked up at least one bracelet every summer in three out of the last four years. Deeb binked his first bracelet in 2015 when he won the $10K PLH event for $318,857. In 2016, he won his second gold when he took down a $1,500 Studament. Add now this year’s PLO bracelet can also be added to his resume. Deeb has now cashed in 57 WSOP events and his WSOP earnings topped $3.3 million.

Deeb almost won his third bracelet last summer, but finished in second place when Ben Yu defeated Deeb heads-up in the $10K Triple Draw Championship to win his second bracelet. Deeb got heads-up with Yu once again, but got a little sweet revenge this time. Deeb knocked out Yu to win Event #42 High Roller and his third bracelet.

Romania’s Bogdan Capitan was the soft spot by default. He walked into one heck of an ambush and was the first player to exit at the final table. David Benyamine went deep in another event, but he couldn’t finish higher than seventh place. Ryan Tosoc’s amazing run ended when he busted in sixth place. Somehow, red-hot Jason Koon got cooled off in fifth place. James Calderaro tried to win back-to-back $25K events, which woulda been redonkulous. Alas, last year’s champ was knocked out in fourth place. The Prince of Poker Scotty Nguyen too went deep, made the final table, but he whiffed on another bracelet. Scotty finished in third place, which was good enough for $593K.

With Scotty’s elimination, it came down to Ben Yu and Shaun Deeb, Two young guns. Both had won two bracelets and were seeking a third. Alas, Deeb defeated Yu. Deeb banked $1.4M and slapped a third piece of bling around his wrist. Yu settled on a consolation prize worth $866,924. Yu took third in the $10K Stud just the other day and he’s cashed in 9 events so far this summer. Yu’s advanced to two final tables, but he could pull off the end-game magic. Yu earned a second place and third place finish in the last couple of days. Yu also moved up the POY leaderboard and he’s in the Top 10.