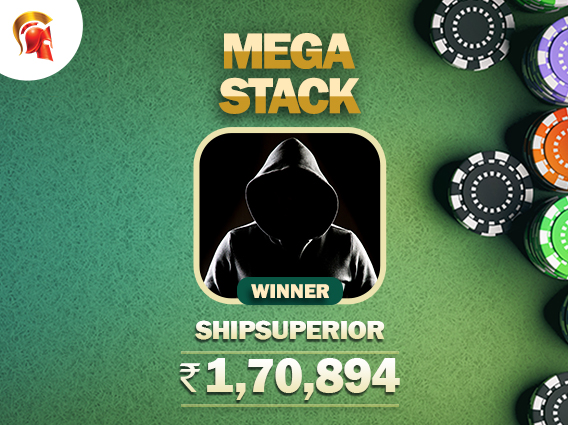 The Mega Stack INR 10 Lakh GTD tournament took place yesterday, as it does every Tuesday at 7:30pm IST. The buy-in to this re-entry tournament was set at INR 3,300 and at the end of the late registration period, as total of 413 entries had registered to the tournament, with guarantee being passed again, and a new prize pool of INR 12.39 lakh being generated.

The top 39 finishers shared this prize pool with a minimum cash prize of INR 8,549, while the player taking home the biggest prize of all was ‘shipsuperior’. With the final survivors being almost similarly stacked, a 4-way deal was struck on the final table, with shipsuperior taking away the biggest pay-out of INR 1,70,894 for first place.

The final hand took place in Level #54 of the tournament, with the blinds running at 22,500/45,000 – 4,500, and shipsuperior ahead of the other three players. After the blinds and antes were posted, the three players folded their hands as shipsuperior won another pot and increased his chip lead slightly.

Here’s when the deal was struck among the final four, with shipsuperior becoming the default winner, and ‘PavanJain’ finishing as runner-up, for which he was awarded INR 1,58,254. Finishing in third place was ‘guru’, who won INR 1,54,465, while ‘DONKAKING’ took home INR 1,48,277 for finishing fourth.

Today is a Wednesday and the INR 20 lakh GTD Destiny tournament will be contested tonight on Spartan, with the winner also getting a chance to win a poker package to Europe. Keep reading GutshotMagazine.com for more updates on that tournament and other major tournaments in the country.

Don’t have an account on The Spartan Poker? Don’t miss out on their bonuses, guarantee-smashing tournaments and of course, their daily featured tournaments. Sign-up HERE.