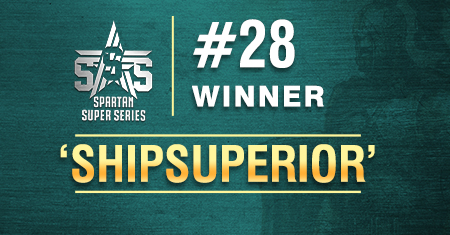 The second tournament of Day 6 of the Spartan Super Series kicked off at 2:00 pm and there was plenty of participation from players at this ongoing series at The Spartan Poker. After Siddarth Singhvi took down his third title of the series, this time around it was the turn of ‘shipsuperior’ who outlasted the field to win his maiden SSS title and the biggest share of the prizepool.

203 entries took the prizepool to INR 3,40,200 well past its original 3 Lakhs guarantee. 27 players cashed out in this event with a minimum assured payday of INR 3,402 going their way. One of the regulars who ran deep in this event was Gaurav Jaiin a.k.a ‘NuttieGuttie’. Jaiin who is known for having taking down Spartan’s signature tournament The Millionaire in the past ran all the way up to 9th place which is where he eventually busted out for a score of INR 7,620.

The afore-mentioned Singhvi who plays as ‘PeterPunter’ was once again in the thick of the action and was looking to create a record of sorts by winning another title on the same day but this time it could end up being a back-to-back one. However despite his valiant efforts, Singhvi was only able to finish in 6th place for a prize of INR 17,486.

When the field finally got whittled down to heads-up, the battle for the title of this tournament came down to shipsuperior and ‘^iOOi^‘. The latter held a slender lead of 1.6 million over shipsuperior’s 1.4 million as they launched into a long and hard fought heads-up. Holding even stacks did not deter either player from going at it with each other with plenty of pots, healthy and otherwise changing hands. One of the major hands which went down had ^iOOi^ (7d Jd) going up against shipsuperior’s Th 4h.A preflop raise by ^iOOi^ which was flatted by his opponent brought Kh 7h 6c on the flop.

Mid-pair for the preflop initiator against a flush draw for shipsuperior had both players checking. On the turn 2d, shipsuperior decided to take the lead and fired out a bet which was called by his opponent to see the river. A magic card 6h for shipsuperior on the fourth street had him betting 600k to extract some value out of the pot. When ^iOOi^ made the call, he saw the bad news as his opponent had the better hand in a rivered flush which gave him a pot of over 1.5 million.

The heads-up battled was played over a long 62 hands before the final hand took place that shipsuperior holding a 4:1 lead over ^iOOi^. shipsuperior holding pocket Fours (4d 4s) decided to make a small raise hoping to make it look like a chipleader’s stealing move. It worked as ^iOOi^ made the all-in move with 6c 9h to drive his opponent away. No such luck given the pocket pair and the board of 7c 2c Ad 4c Ah gave a full house Fours full of Aces to the winner. A first place prize of INR 75,354 went the way of shipsuperior along with his first SSS title of the series while ^iOOi^ would have to make do with second place winnings of INR 50,859. Not a bad day’s work for a buy-in amount of INR 990.