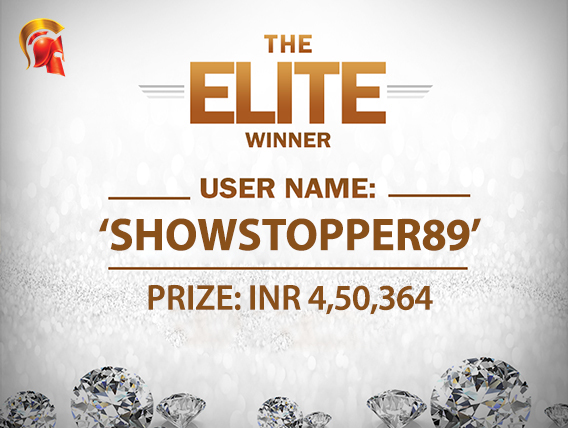 ‘showstopper89’ wins the Elite at Spartan for INR 4.5 Lakhs

Friday night saw yet another edition of the The Elite tournament take place on The Spartan Poker which went on to crush the guarantee and in the end saw ‘showtopper89’ claim victory in this big buy-in tournament. This 6-max event features a buy-in of INR 11,000 and has INT 15 Lakhs on offer as a guaranteed prize. 127 entries came together to take the eventual prizepool to INR 17.9 Lakhs which was distributed among the top 17 finishers with everyone assured a min payday of INR 28,103.

The tournament which lasted for six hours included some of the top regs and pros of the domestic circuit including Kartik ‘TheInternetKid’ Ved who finished in second place to showtopper89. It all came a head in Level 33 when the final hand was dealt. showstopper89 had a commanding lead even when 3-way action became headsup a level earlier. He had more than 2 million in chips as compared to the short stack (209k) of Spewushhhiiiii who got eliminated when showstopper89 made his straight against the Five pair of Spewushhhiiiii.

That consolidated his lead further and it was only a matter of time before a situation presented itself when TheInternetKid had to take a stand. That happened in Level 33 (4,500/9,000 ante 1,125) when showstopper with As 9h decided to raise it to 27,00 which TheInternetKid had no hesitation going all-in on considering he had a pocket pair (4s 4c) which is pretty good holdings in headsup. The chipleader made the call to see him get the bigger two pair of Nines and Sevens on a board of 8h 7d 9s 3h 7h. That landed him the title and first place prize of INR 4,50,364 while his opponent and first runner-up would have to settle for a not so bad score of INR 3,04,300 to kick off his weekend grind.

Remember the Elite and many of the other daily featured tournaments are part of the Spartan Hot Tournament Leaderboard challenge where players can compete for points and try to win the lion’s share (INR 5 Lakhs) of a 15 Lakh Leaderboard prize. Not too many days left in the challenge which gets done at the end of this month so join in to score those points now! Don’t have a Spartan account?! Sign up HERE and get a free starting bankroll of INR 100!