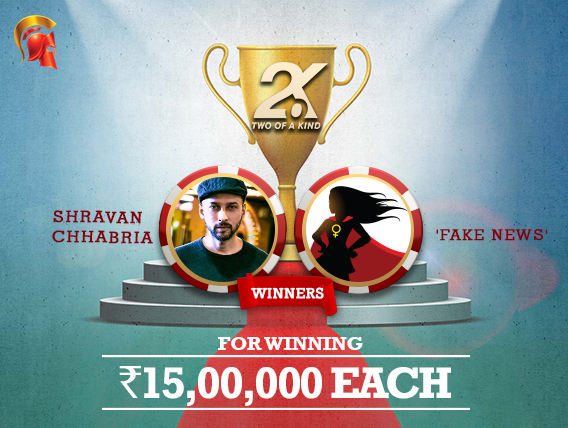 Sundays are always great for online poker players as you always get the highest guarantee tournaments on this day of the week. Similarly, The Spartan Poker hosted quite a few big tournaments this Sunday – Abhishek Kumar won the Sunday SuperStack and Sam Anand shipped the Big Daddy tournament.

However, the biggest of the Sunday tournaments on Spartan was the Two of a Kind, which is one of their signature tournaments that takes place once a month. The specialty of this tournament is that not one, but the top two players walk away with the biggest prize. Yesterday’s advertised guarantee for the 2oK tournament was INR 15 lakh to the top two finishers. Also, the top 70 players were paid out INR 8,289 each.

The INR 5,500 buy-in tournament saw a field of 921 entries and it went on for nearly 11 hours, having kicked off at 4:30 pm IST and ending the next morning at 3:14 am IST. ‘pkusingh’, ‘fake news’ and ‘D.Trump04’ were a part of the 3-way play, until pkusingh’s pocket aces lost to fake news’ three of a kind fives, and the former’s stack was busted.

The tournament ended right there, and the final two players walked away with massive winnings of INR 15 lakh each. D.Trump04 is none other than Shravan Chhabria, who is a well-known poker pro in both the live and online poker circuit in India. Gutshot caught up with the winners after this win, but fake news preferred to stay anonymous. 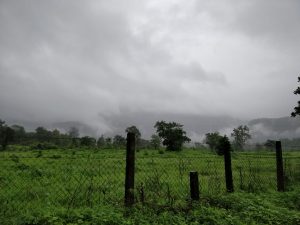 Chhabria sent us this picture of where he played the 2oK tournament. “Hard to lose here,” he said. We agree that it’s hard to lose in such a place, surrounded by nature. We asked him how it felt to ship this major online poker tournament. He said, “Feels pretty great to ship the Two of a Kind. Have had a bunch of deep runs in this tournament, and I finally sealed it. I ran great and made the most of it!”

He also spoke about the competition he faced before coming out on top, saying, “The overall field was pretty tough, and I feel quite fortunate to come out on top. Would like to give a shout out to ‘Soona Paana’. Tough luck mate, that was brutal.” On a parting note, he commented on playing tournaments on Spartan, saying, “The Spartan Poker has been a pioneer of Indian poker. To ship one of their majors feels great!!”

The second winner, fake news, said, “It feels great to take down one of the biggest tournaments available online. There were many tough opponents throughout the tournament. On the FT, Chhabria was putting a lot of pressure when he became chipleader. A key hand was when I had 55 and hit a set on the turn and got it in. He had AA. This was 3 handed with both of us being pretty even in chips so the payjump was massive.”

“I’m enjoying the new software and looking forward to IOPC series coming up,” said fake news on a parting note.

The next tournament series on Spartan is the India Online Poker Championship which kicks off on 13th July. Keep reading GutshotMagazine.com for daily updates on major Indian online poker tournaments.