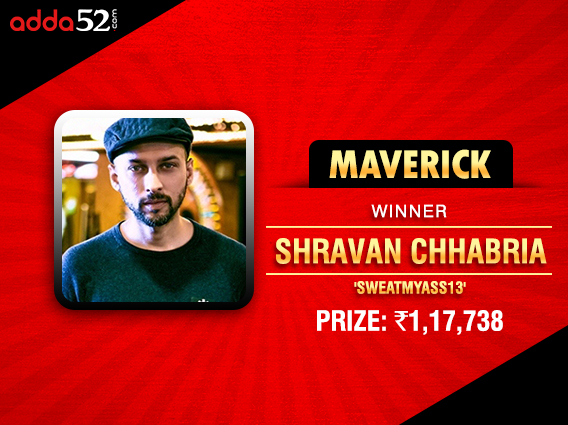 Here’s one player who has been around the Indian poker circuit since many years now, with plenty of titles across many websites online, as well as a few live titles across the country – Shravan Chhabria. The player has live cashes in four different countries as well as earnings in excess of $100k.

Last night, Chhabria added another title to his list of online poker achievements, shipping a featured tournament on Adda52. He took part in Maverick INR 6 lakh GTD, an Adda52 featured tournament that takes place every Wednesday night, and he shipped it, taking away another 6-figure online score.

After a few days of experiencing server difficulties, Adda52 was back up and Maverick was greeted with a resounding participation last night, with a total of 654 entries joining the tournament, each paying a buy-in of INR 1,100. This inflated the prize pool to INR 6.54 lakh and it allowed the top 71 players from the field to be paid out a minimum prize of INR 3,109.

Emerging victorious from the field was Chhabria, who ended a grind that went on for nearly 8 hours, with the tournament beginning at 8pm last night and ending at 3:54am this morning. Playing under the name ‘sweatmyass13’, Chhabria took down the title along with INR 1,17,738 in prize money. When contacted, Chhabria said, “I’ve had a bunch of deep runs recently, so it feels good to close one finally.”

He managed this small bankroll addition after he beat ‘Danger3040’ in heads-up, who took away INR 86,302 for finishing second. Today’s featured tournament on Adda52 is the INR 20 lakh GTD Godfather and you can keep reading GutshotMagazine.com for an update on that tournament as well.