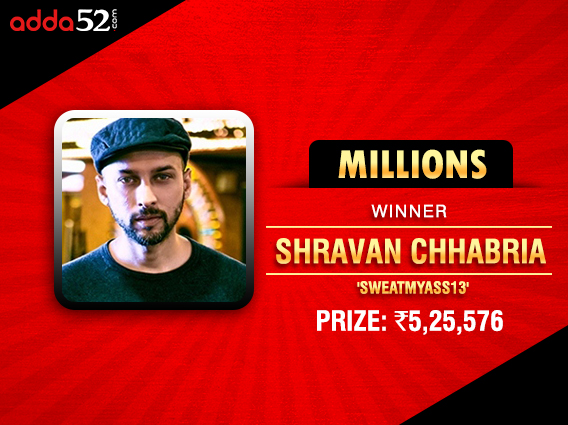 When you think about some of the toughest fields in Indian poker, you must always think about the Adda52 Millions INR 20 lakh GTD as this one always attracts India’s best pros and regulars. With a buy-in of INR 11,000, this is played every Sunday on Adda52 and this high-value tournament gives you the chance to rake in huge profits.

This Sunday’s tournament was no different for all those taking part. Ask any of the past winners and they’ll tell you how difficult it is to emerge victorious in the Adda52 Millions. Ask Shravan Chhabria, who became the most recent winner a couple of nights back, taking away a massive prize of INR 5,25,576 for first place.

Even with the steep entry fee, a strong participation of 217 entries was registered with the guarantee being passed and a new prize pool of INR 21.7 lakh being formed. Ultimately, only 24 of them were paid out with a minimum cash prize of INR 18,445, from which Chhabria aka ‘sweatmyass13’ was the most profitable.

Chhabria has been on a good run in online poker of late, winning Maverick less than a week back and then also finishing second to Sriharsha Doddapaneni in Whale just a couple of nights later. What’s ironic is that Sriharsha and Chhabria found themselves competing in heads-up again in the Millions, but this time it was sweet revenge for Chhabria, winning and securing the top pay-check.

We spoke to Chhabria after this victory and he said, “Well it was a really gruelling 8-9 hours. I got a really good start and held onto it till the end. The Final Table was super reggy, so feel quite fortunate to come on top as I was the shortest at one time but hung around as the structure was really good and managed to make a comeback. Finally, I did a deal with my fellow Rajasthan Tilters teammate Sriharsha; was fun being heads-up with him again after just two days.”

The tournament ended at 4:31am on Monday morning and after the deal, Sriharsha Doddapaneni aka ‘Ivey2’ ended with the second-place prize of INR 4,17,289, continuing a pretty good run in online poker himself. In 5th place was WPT India Main Event runner-up Sahil Mahboobani aka ‘ImHighIshove’ while Adda52 Team Pro Kunal Patni aka ‘KunalPatni’ finished in 6th place. Pranav Khandalkar aka ‘pkpoker’ finished in 7th place.