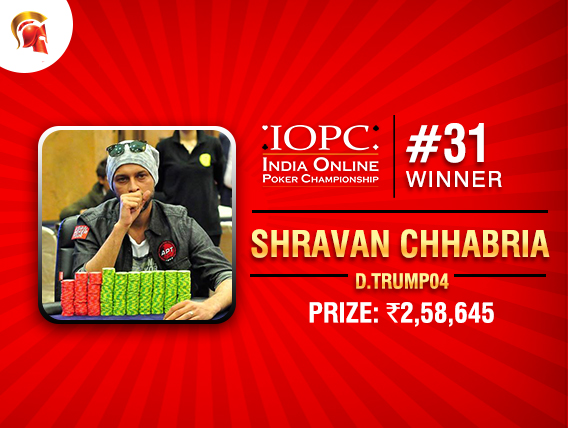 The excitement is growing each day on The Spartan Poker, with the India Online Poker Championship (IOPC) currently taking place. The series has a record-breaking INR 7+ crore up for grabs and yesterday was Day 6 of the series, where five IOPC tournaments took place.

The last tournament of the day was IOPC Event #31 INR 12 Lac GTD (3300 RE), which kicked off at 9:30pm IST. The guarantee was broken across all tournaments during the day and this tournament was no different. 430 entries meant that the prize pool was taken up to INR 12.9 lakh.

The top 39 players were paid out a minimum prize of INR 8,901 and after a few hours, it was popular poker pro Shravan Chhabria who took down the title and INR 2,58,645 for first place. Chhabria plays under the username ‘D.Trump04’ and this was his first title of the current IOPC series.

Chhabria is currently on a hot run, having recently also shipped the Two of a Kind tournament on Spartan, for INR 15 lakh. He beat another reg Mayank Jaggi in heads-up. Jaggi plays under the username ‘alwayslimpAA’ and he is also on a hot streak, having recorded some good scores in Las Vegas recently.

Jaggi took home INR 1,71,957 for finishing in second place in this tournament. He was slightly behind in chips and he called with Q-K, when Chhabria went all-in pre-flop with A-8. The board opened K-A-6-8-9 and Jaggi’s pair of Kings wasn’t enough for Chhabria’s two pairs – Aces and Eights.

Gutshot caught up with Chhabria after he shipped yet another poker title in India. We asked him the overall experience of winning an IOPC title. He replied saying, “It was great to ship an IOPC tournament. I had some sharks on the table like Danish Shaikh, so it feels good to come out on top.”