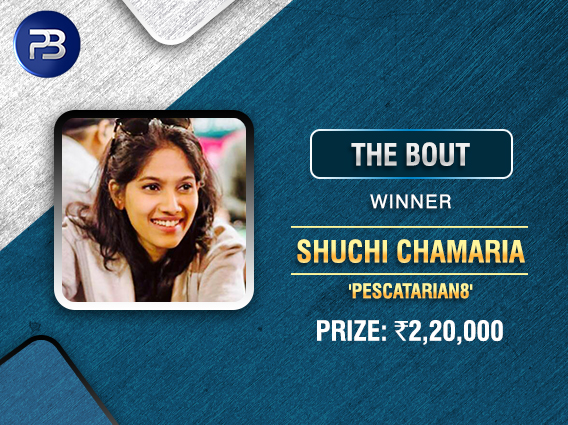 We all love playing and following the top online poker tournaments in India, whether it may be on The Spartan Poker or Adda52 or PokerBaazi, or any of the other up and coming websites. What we love even more is when some of India’s top pros are among the final finishers and in this case, are crowned champions.

The Bout is fairly new tournament offering by PokerBaazi, one which is played every Monday at 8pm and one that has a guaranteed prize pool of INR 10 lakh. The most recent edition of this tournament ended with none other than female pro Shuchi Chamaria aka ‘pescatarian8’ taking down the title.

Now we all know that Chamaria has got training from one of the best in the business – PokerStars Team Pro Aditya ‘Intervention’ Agarwal, who also happens to be Chamaria’s husband. Chamaria recently made a deep run in the Baadshah Live Main Event in Goa, and then immediately followed it up with this victory on PokerBaazi.

Chamaria qualified via the online Day 1A for that ME and eventually finished 4th for INR 3.25 lakh, in a tournament where Aditya Sushant was crowned champion. Now, she has managed to outlast 234 entries in The Bout, which is an INR 4,400 buy-in tournament. For this, she was awarded a bankroll addition of INR 2,20,000 for finishing first.

The tournament ended at 1:54am on Tuesday morning and Chamaria beat some known faces on the Final Table before being crowned champion. She beat ‘YOUAGAIN’ in heads-up, who took away INR 1,65,000 for finishing second. In third place was none other than Vinay B aka ‘Vinstill’ who won INR 1,20,000. Also on the FT was Sahil Mahboobani aka ‘ImHighIshove’, who finished 5th and took away INR 67,500 for this run.