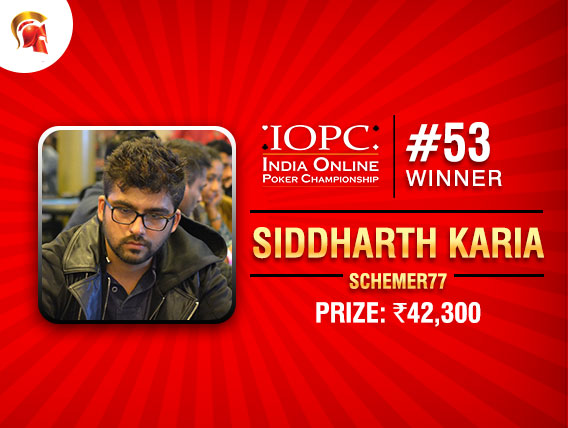 Yesterday was the final day of the India Online Poker Championship (IOPC) and seven IOPC tournaments were lined up for the day, including the prestigious IOPC Main Event (shipped by Sangeeth Mohan) and other side events. The fifth tournament of the day was IOPC Event #53 INR 2 Lac GTD (770 FO), which began at 5:30pm IST.

256 entries were recorded to this tournament and the top 31 players were awarded a minimum cash prize of INR 1,760. After a few hours of grinding, it was popular player Siddharth Karia who came out on top of these entries, shipping the title and taking away the top prize of INR 42,300.

Karia has won a few online poker titles in the past and has made a few deep runs in this edition of The Spartan Poker‘s IOPC as well. This helped him accumulate enough of points to finish 7th on the IOPC Leaderboard and take away an additional leaderboard prize of INR 90,000.

Playing under the username ‘schemer77’, Karia faced off against ‘Antidote’ in heads-up and he managed to win the title in Level #46 of the tournament, when the blinds were running 27,000/54,000 – 6,750. In the final hand, Antidote went all-in pre-flop with As 3d and Karia made the call with Qc Ac.

Both players were nearly equal in chips when they pushed their stacks into the pot. The flop opened 7c 5c 9h, giving Karia the lead with an Ace-high hand and a higher kicker (Q). The turn opened 2s and the river opened 3c, which gave Antidote a 3-pair but completed an Ace-high flush for Karia. Antidote took home the runners-up prize of INR 28,480.

Gutshot had a word with Karia after this IOPC tournament victory. He said, “I was 9th on the leaderboard before the game started but hadn’t got my goodies (for winning an IOPC title) by then. This one was only for the goodies. It was part of the Sunday grind, so most of it’s a blur, but I remember coming back from less than 10 BB, which was awesome. Cheers.”

Keep reading GutshotMagazine.com for more poker stories from around the world.