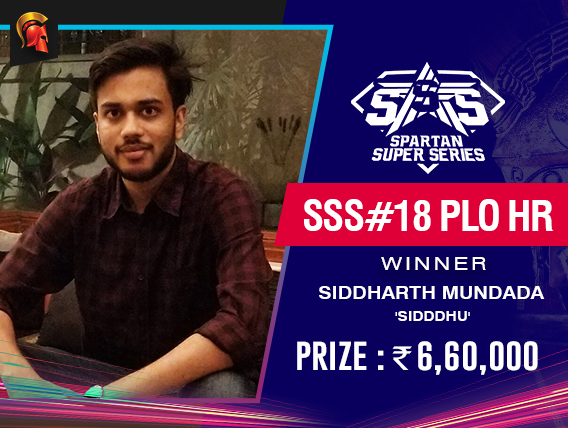 The tournament was hosted with a buy-in of INR 22,000, which ensured the top talents and the cream of the crop in contention. The field came to 110 entries (including 21 re-entries and 38 re-buys).

The player to overcome the field and bag the first-place cash prize of an enormous INR 6,60,000 was well-known player Siddharth Mundada aka ‘Sidddhu’. He beat ‘7vik’ in heads-up to secure his title. The last hand of the tournament saw Mundada with an enormous chip lead and was only waiting for the final blow to be dealt.

Mundada was with 7c Qd Ks 2s and his opponent with 9s 5d 8c 5s who shoved his stack pre-flop. The board revealed Ah Ts 2h As 3s and gave both players a flush. However, Mundada swept the table clean and won the title with a higher King kicker. The runner-up settled for INR 5,28,000 as the second-place cash prize, which looks like a first-place prize money in itself.

Mundada is a regular online grinder on various leading poker platforms. Just on Spartan, he won the coveted Destiny title twice, first in December 2017 and next in August 2018. He won those for a heavy pay-check of INR 5,62,500 and INR 6,32,025 respectively. He has kept it quiet for a while but with this awesome win last night, Mundada will be hoping to cash even bigger than this in coming months.

Since it was a high-stakes tournament, almost all the names in the field were top talents in their own right. The top 10 places were paid in the tournament for a min-cash of a good INR 55,000. Spartan always hosts some of the best tournaments like this one as part of the SSS and more are lined up till the final day of SSS, including the Main Event which offers a whopping INR 75 Lakhs GTD.

Keep reading GutshotMagazine.com for first updates from upcoming SSS events and for general poker news from around the world.