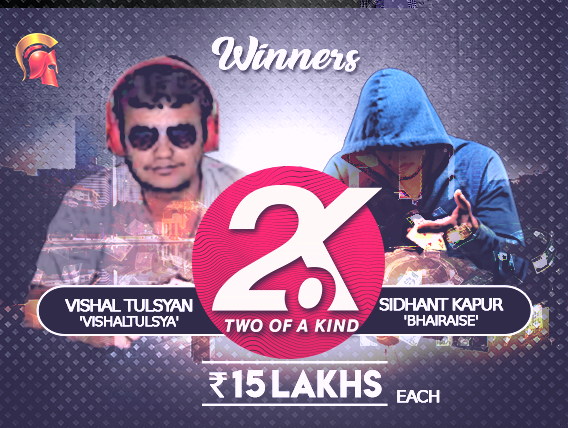 The Two of a Kind (2.o.K) tournament has always been one of The Spartan Poker’s most successful tournament, where not one, but two players are awarded the same top prize. Regardless of the prize pool generated, Spartan gives away a massive prize of INR 15 lakh each to the top two finishers of this monthly tournament.

Yesterday’s tournament had the usual buy-in of INR 5,500 but had a new timing of 6pm IST. It was nearly time for the sunrise by the time the winners were declared, with the tournament lasting close to 11 hours. A massive field of 1,051 entries registered to the tournament, thus creating a prize pool of over INR 52 lakh, which was shared among the top 70 players (minimum cash: INR 9,459).

It went on until Level #60 of the tournament, where the blinds were at 37,500/75,000 – 7,500 when the final hand was played. The tournament ends when the final two players are decided, and it was ‘Jannat52’ who was sadly eliminated in third place for INR 5,78,050 and missed the massive pay jump for the first two spots.

He went all-in with pocket Tens pre-flop against popular player Vishal Tulsyan’s Kh Qh. The third player was Sidhant Kapur aka ‘BhaiRaise’, and he made the right decision of folding his hand. The community cards opened Qc 2c 6h 2h 3h and the three successive hearts saw Tulsyan completing a King-high flush, which was much better than Jannat52’s Tens and Twos.

The tournament then came to an end with Jannat52 busting his stack in this hand. Both of Tulsyan and Kapur would’ve been delighted, being rewarded for their night vigil with massive prizes of INR 15 lakh each. Regular online player Anirban Das aka ‘pokernoob’ also made a deep run, finishing 4th for INR 3,44,202.

Keep reading GutshotMagazine.com for similar updates on the biggest and best online poker tournaments in India.