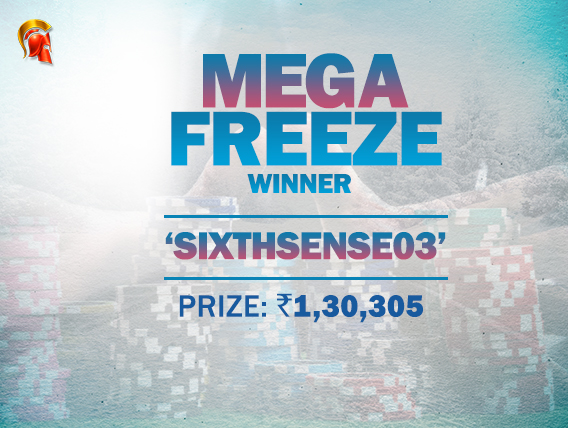 Every day, The Spartan Poker hosts one of their featured tournaments and yesterday being Monday, it was time to play the Mega Freeze tournament. With a buy-in of just INR 5,500 and a prize pool of INR 5 lakh, there’s always a lot of value for players who register to this freezeout tournament.

Yesterday’s Mega Freeze tournament kicked off at 7:30 pm IST and it wrapped up a little over 5 hours later. A total of 102 entries registered to the tournament and the guarantee was beaten. The top 15 players were paid out a minimum cash prize of INR 9,180 while ‘SixthSense03’ shipped the tournament for the top prize of INR 1,30,305.

‘Wraithlord’ was knocked out in third place when his Nines and Fives pairs turned out to be inferior to the pairs of Aces and Sevens that ‘checm@te’ hit. checm@te then went into heads-up against SixthSense03 with a healthy chip lead. However, a big pot in heads-up went the latter’s way, when his pair of Kings beat his opponents pair of Sevens. He took the lead and it didn’t take much for him to take down the title after that.

checm@te went all in pre-flop with pocket sevens while SixthSense03 made the call, holding A-Q. The board opened A-3-K-T-3, putting SixthSense03 ahead right from the flop. He won with two pairs – Aces and Threes. Gutshot caught up with the winner after he shipped the tournament.

He wished to stay anonymous, but he told us how he felt after winning this major tournament on Spartan. “I am quite relieved after the win. I was away from poker for some time now and had not won anything for a long time. So, I’m very happy about this win,” he said.

checm@te finished in second place and he wouldn’t be too disappointed either, taking home INR 89,760 for second place. All eyes will now be on tonight’s featured tournament called the Mega Stack, which is an INR 12 lakh GTD contest. Keep reading GutshotMagazine.com to know who ships that tournament.