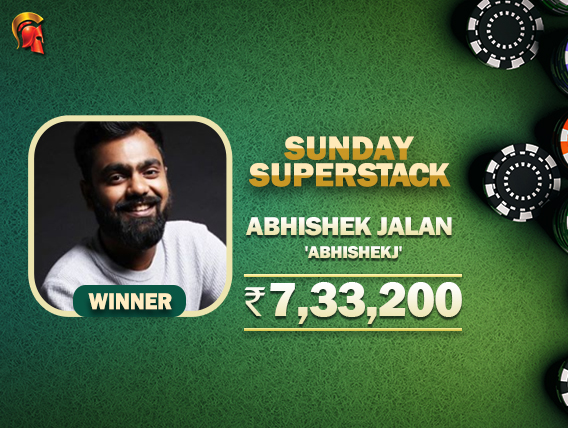 It’s always a great feeling for any company when their ambassadors are doing well and the same applies for The Spartan Poker and poker pro Abhishek Jalan at the moment, with the latter on a very good run, both in online as well as live poker.

Jalan was victorious in Goa last month, where he shipped the INR 35k SuperStack Event at the WPT India series, and last night, he went on to take down another major title, this time on the virtual felts at Spartan. He was brilliant on the night to win Spartan’s biggest featured tournament – Sunday SuperStack INR 25 Lakh GTD.

The Spartan Ace registered to this INR 5,500 tournament and he went on to top a massive field of 564 entries to win the tournament, taking away the biggest chunk of the increased prize pool of INR 28.2 lakh. The top 50 players were paid out a minimum cash of INR 14,100, but Jalan was the biggest winner from them all, securing the massive top-prize pay-check of INR 7,33,200.

The FT would’ve been a relatively easier one for Jalan as there were not too many known players there. Eventually, Jalan hit the final nail in the coffin when he busted ‘BigL’ in heads-up in Level #48 of the tournament, with the blinds having reached 35,000/70,000-8,750.

Here, ‘BigL’ made smaller bets on the Qd 8h 2h flop and 4s turn, which were received with flat calls from Jalan. On the 5s river card, Jalan decided to move all-in and BigL made the call. Jalan revealed Eights and Fives that he completed on the river, narrowly beating his opponent’s Eight and Fours. The tournament wound up at 2:25am this morning, ending a nearly 7-hour grind.