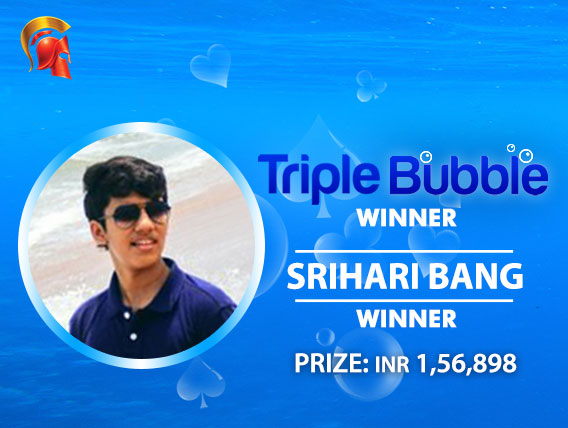 One of the most popular tournaments introduced in recent times is the Triple Bubble at The Spartan Poker. Featuring a unique concept where not one but three bubbles are paid out. The first bubble as everyone knows is the payout bubble where normally the player falls just short of the money. In this first of the Triple Bubble levels, the players will get his first buy-in of INR 3,300 back. The next bubble is the player who busts just short of the final table, who will receive a ticket into Spartan’s signature tournament the Millionaire and the final bubble is the player who falls just short of the title. This player receives a Millionaire ticket worth INR 7,700 as well as a Two of a Kind tournament ticket worth INR 5,500. But let’s not forget that there is a winner also in this tournament and that winner was one of the consistent performers in recent times at Spartan, Srihari Bang a.k.a bangbang99.

Kicking off at 9 pm on Friday night alongside the ongoing Little Big Series, the Triple Bubble drew the interest of 155 entries who were battling for the lion’s share of the 9 Lakhs GTD prizepool. 23 players got paid out and the min-cash was INR 10,440. LBS title winner Vikas ‘viks82’ Shah was one of the players who ran deep but he was unable to break on to the final table finishing in 18th place. Other players who did make it to the final table included Kartik ‘TheInternetKid’ Ved and Goonjan Mall who plays at Spartan as ‘gmtesting’. These players finished in 6th (INR 48,150) and 5th (INR 62,100) place respectively. One more elimination later and the tournament found itself in three-way stage between ‘giraffeganger_1’, ‘bangbang99’ and ‘icmizer’.

bangbang99 had just under a million in chips while icmizer had about 800k and giraffeganger_1 had 678k. All three players were looking to make a deal as within a few hands of the fourth place finishers getting knocked, they decided to chop the pot on the basis of their stacks. As a result, the biggest stack of bangbang99 took down the top prize of INR 1,56,898. icmizer got the runner-up prize of INR 1,47,357 while giraffeganger_1 rounded off the top three with his payout of INR 1,41,243. A delighted Srihari Bang spoke to Gutshot earlier today about winning yet another title, “The final table was filled with poker pros, Abhishek (Rathod) sir, Kartik Ved and Goonjan Mall.  All were giving a real tough competition and it helped me focus more as i coudn’t afford a single mistake. There was this one key hand that Kartik squeezed from BB and I jammed A9o to win it. Sometimes poker is all about reads and taking decisions rather than merely playing the cards.”

Well he sure does know how to read ’em right does Srihari and that’s some nice bank he can use in other featured tournaments on Spartan as well as the ongoing Little Big Series. Tomorrow is the final day of the LBS and its Main Event will be the feature attraction so stay tuned to GutshotMagazine.com as we bring you all the updates!