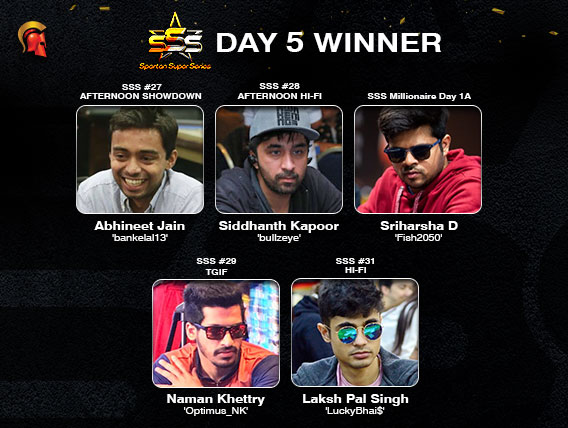 The Spartan Super Series (SSS) never fails to surprise us all, this time offering a massive guarantee of INR 4.3+ Crore on Spartan Poker. Yesterday was Day 5 of the series on their platform and once again, there were a number of winners announced with the biggest tournament of the day being Elite, which had a massive INR 25 Lakh guarantee. Keep reading for our complete summary of SSS Day 5…

First tournament of the day and the buy-in was set at INR 550, allowing 387 players to register to the tournament and create a new prize pool of INR 1,83,500. This was then distributed among the top 27 spots of the event, each getting a minimum of INR 1,835. However, ‘varonir’ didn’t want to settle for anything less than the top prize yesterday, shipping the tournament in style, after a double elimination in the final hand. All players were in the hand pre-flop and the board rolled out J♥ 3♦ 2♦ 5♠ 4♠, with varonir’s 2-6 straight beating ‘SERPENT’ who had an A-5 straight, beating 3rd place finisher ‘Jaydee’ who had pocket Tens.

The buy-in for the second tournament surged up to INR 2,200 and this one attracted 84 unique players, with Abhineet Jain aka ‘bankelal13’ coming out on top of the field. The top 17 were paid and each of them received a min-cash of 6,280, but Jain ended as the happiest and wealthiest of the lot. The final hand was a PFAI situation where Jain showed AJ and ‘realitycHeque$$’ revealed pocket Sixes on a 7♥ 7♣ 2♠ J♥ A♦ board, the former winning with Aces and Jacks over Sevens and Sixes.

INR 1,100 was the entry if you wanted to play in this tournament and we had 132 unique players doing so yesterday, with known entity Siddhanth Kapoor aka ‘bullzeye’ finishing on top of the field. The actor, entrepreneur, DJ and poker player has won many titles on Spartan Poker in the past, and he added another one to his tally yesterday. Kapoor was up against Kunal Sharma aka ‘cvc’ in heads-up. In the final hand, Sharma had pocket Nines and he hit a set on the flop. However, Kapoor held K♣ A♣ and hit a flush on the river to take down the pot and win the title.

754 entries registered to this tournament which has become extremely popular in recent weeks. Each of them paid the INR 1,650 buy-in and by the end of the night, the prize pool was distributed among the top 63 players, each winning a minimum of INR 5,220. Naman Khettry aka ‘Optimus_NK’ faced Spartan Poker regular Ram Kakkar aka ‘TheLagLawyer’ in heads-up of the event and the two of them agreed on a deal to end the tournament. Khettry had a bigger stack at the time, which gave him the title and a slightly higher prize too. Commenting on the experience, Khettry said, “The structure was good for the tournament. Being a working professional, it would help if such tournaments are available on Friday/Saturday and not just on Sundays, as Mondays are working.”

The top poker players in India wait for Fridays only to play in the Elite and yesterday was another very successful Elite, which saw 311 entries each paying INR 11,000 to join the tournament. The prize pool was crushed again, creating a new amount of INR 31.1 Lakh which was shared later by the top 31 finishers of the night. It was ‘Kingofking’ who managed to take down the title on Spartan Poker but he preferred to stay anonymous after the victory. The player was up against Ankit Wadhawan aka ‘Shippament’ in heads-up, the latter shoving pre-flop in the final hand with J9. His opponent called and revealed AJ and won with a pair of Aces which he hit on the flop itself.

The Hi-Fi is one of the most popular events on Spartan Poker and here, 210 unique players registered with the prize pool going out to only the top 36, with a minimum prize of INR 4,550 to each. We had another known player shipping the tournament in Laksh Pal Singh aka ‘LuckyBhai$’ who took away top honours, winning the final tournament of SSS Day 5 after his pocket Aces beat KT of his opponent ‘masterroshi521’ in the final hand.

SSS – The Millionaire Day 1A

The much-awaited SSS Millionaire had its first starting flight yesterday and even though the buy-in was a steep one of INR 11,000, we had a healthy field of 446 entries that added INR 44+ Lakh to the prize pool. Taking the lead from the list of survivors is none other than Sriharsha Doddapaneni aka ‘Fish2050’ who took away a bag of 252,236 chips at the end of the flight. Close behind him is ‘propernit’ who has around 217k in chips.

Just two days are left in this edition of the Spartan Super Series. While Mega Freeze is the featured tournament for today, Millionaire will also have its Day 1B played tonight and you can stay tuned to GutshotMagazine.com for all updates on the same.