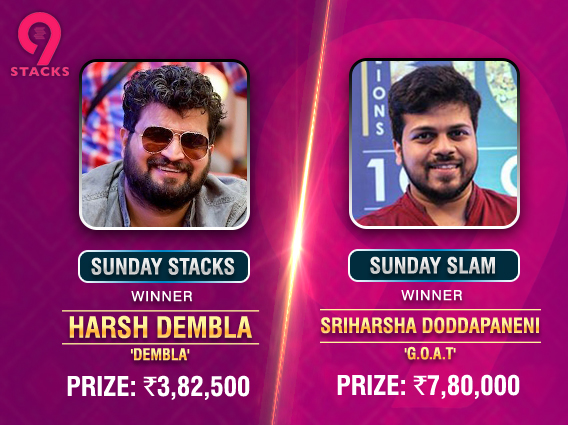 To start the new year of 2019 on a good note, 9stacks launched an exciting series called Happy New Year (HNY) 2019. The series ran between 1-6 January and witnessed a total of INR 1 Crore up for grabs in guaranteed prizes. The series also featured a leaderboard for its duration worth INR 8 Lakhs, paying top 15 places.

Yesterday being the finale day of HNY 2019, the platform had hosted the highest value tournament of the series, the Sunday SLAM. The tournament had INR 30 Lakhs as guaranteed prize pool. Another high stakes event for the evening was 9stacks feature Sunday tournament – Sunday Stacks – where the guarantee was increased by an extra INR 5 Lakhs, creating INR 15 Lakhs GTD. Both the tournaments concluded the series on a successful note, paving the way for other such big series in the coming months on 9stacks.

The Sunday SLAM attracted a total of 177 entries (including 59 re-buys) for INR 11,000 buy-in. The field saw top talent from across the country participating. Yesterday being a Sunday, other platforms also hosted quite significant events, but the Sunday SLAM still attracted a decent playing field on 9stacks.

The high stakes tournament got over at 3.58 am today morning. The long haul was overcome by the well-known regular Sriharsha Doddapaneni, playing under his pseudonym ‘G.O.A.T’. He won INR 7,80,000 as 1st place cash prize. He beat another regular in heads-up, Anik Ajmera aka ‘Incognito-Nit’ who had to settle for INR 5,40,000. Ajmera had won the Adda52 Millions previously for upwards of INR 5 Lakhs.

Doddapaneni obviously needs no introduction, having shipped plenty of online tournaments in the recent past on various reputed sites. He has rightly selected his username ‘G.O.A.T’, which means ‘Greatest of All Time’ and his record is pretty impressive. This welcome win will probably see him buying into a few tournaments in this action-packed month and he’ll be hoping to ship a few too.

Dembla has previously shipped online tourneys and has sufficient cashes. Along with that, he is also an accomplished live player and he finished 9th in the Manila Megastack 10 Main Event for ~INR 3.27 Lakhs just last month. Dembla also finished 9th in WPT India Main Event held recently at the Indian poker capital of Goa, whi was ultimately won by Nikunj Jhunjhunwala.

We spoke to Dembla after his win and he had this to say, “It was a great experience playing on 9stacks. The structure of the tournament was really deep and saw a lot of playability on the Final Table.“

Keep reading GutshotMagazine.com for similar tournament results, promotional announcements as well as for general poker news and analysis from around the world.